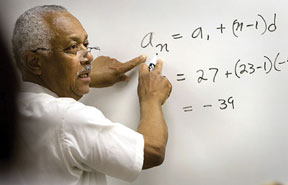 Math: The next revolution in Black achievement

“Children are suffering from a toxic cocktail of poverty, illiteracy, racial discrimination and massive incarceration that sentences poor boys to dead-end and hopeless lives,” she said. And “Black boys,” she continues, “are always at the bottom of the totem pole.”

Just look at the classroom. Black males score below their peers on almost every measure associated with educational achievement. In 2009, for example, just 12 percent of Black boys in the fourth grade performed at or above proficiency in reading and just 12 percent of Black eighth-grade boys met or exceeded proficiency in mathematics, according to the National Assessment of Educational Progress (NAEP). No wonder the high school dropout rate for Black males is more than 50 percent in many urban districts.

The classroom can and should be an antidote to these problems, and in many cases it already is. We have a better understanding than ever of how children learn; how poverty, environment and culture impact learning; and, how well-trained, supported teachers can mitigate these and other factors to help drive student achievement. We need to build the capacity of school communities to put what we know into practice.

Contrary to popular belief, the brain is not static. It is ever-changing, constantly adapting to new approaches and feed-back throughout the lifespan. That should bring hope and confidence to those who believe that we should never give up on a child or a person.

We have learned from, among others, the late Professor Reuven Feuerstein, a cognitive psychologist from Israel known for his work with structural cognitive modifiability — that, in short, the brain has the capacity to be structurally altered, despite adverse early experiences.

James T. Kinard, a mathematician, scientist, and cognitive educator, has used Prof. Feuerstein’s approach with students of color for nearly 20 years. In the mid- to late-1990s, Kinard integrated Feuerstein’s cognitive work in a pilot project, supported by the National Institute of Envionmental Health Sciences, with young men — nearly 95 percent of whom were Black — who lived near industrial pollution sources in inner-city communities and were affected by extreme poverty.

In 2001-10, Kinard led teams that used cognitive modifiability with Black males in grades 5 through 12 in Chic-ago, Ill.; Milwaukee, Wis.; Fort Wayne, Ind; and Los Angeles, Calif. In both of these projects, students of all backgrounds and facing all types of obstacles were found capable of significant gains in learning.

Typically, students learn mathematics through memorization, practicing a narrow range of applications and solving routine problems with single answers. Unless students understand the big picture, however, they cannot develop competency.

The implications of Kinard’s work go beyond algebra. Indeed, mathematics mastery is the next area educators should be focusing on, as we look to improve academic achievement among Black children.

Algebra is the gateway to STEM (Science, Technology, Engineering, Mathematics) education. Deep, conceptual understanding of the big ideas in algebra is essential for success in calculus, physics, chemistry and engineering, all of which are critical to scientific discoveries and technological innovations.

America needs its next generation of leaders in this field, yet too few are graduating with STEM degrees. According to The President’s Council of Advisors on Science and Technology (February 2012 report), “Economic projections point to a need for approximately one million more STEM professionals than the U.S. will produce at the current rate over the next decade if the country is to retain its historical preeminence in science and technology….”

And those leaders must come from all races and cultures, and increasingly from groups who, as Edelman reminds us, are at the “bottom of the totem pole.” If our nation’s success depends on more graduates with STEM degrees, math must be the next revolution in Black student achievement.

Of course, the ability to understand and apply big ideas isn’t only relevant to STEM professions. It is necessary to success in any field. But true engagement — valuing each student’s intellect as well as the creative spirit, quest for challenge and thirst for inquiry every student brings to the classroom — is essential if we are to develop that ability to understand and apply big ideas. True engagement stokes the inner fire to pursue and achieve difficult goals, and ignites a compelling desire to persistently seek, know and understand. As the Chinese Proverb reminds us: “Tell me and I’ll forget; show me and I may remember; involve me and I will understand.”

By so doing we bring renewed belief and high expectations — the cornerstones of hope — into the lives of Black males and, by proxy, to those of all students. An individual who is hopeful sees a path to a better future through the mind’s eye.

Black children want to lead promising lives. All children do. Can’t we, as a nation, write them more promising life stories that don’t end in phrases like the “cradle-to-prison pipeline,” a reference to the combination of economic, health, educational opportunity and other factors that send one in three Black males to prison during their lifetimes? And isn’t it high time we stop blaming the victims of poverty and institutional racism for their shortcomings, while recognizing education is the salient life-line all Americans need?

The National Urban Alliance for Effective Education is founded on the belief that all children and youth have unique talents and gifts that need to be embraced and led and developed and nourished. If we, as a nation, deny their beliefs and expectations, we fail to sustain that most precious commodity: human capital.

Eric J. Cooper is the founder and president of the National Urban Alliance for Effective Education, a nonprofit professional development organization that provides student-focused professional development, advocacy and organizational guidance to accelerate student achievement. He can be reached at e_cooper@nuatc.org. He tweets @ECooper4556. James T. Kinard is a mathematician, scientist, and cognitive educator, and is the author of “Rigorous Mathematical Thinking: Conceptual Formation in the Mathematics Classroom.”

The GOP and identity politics in the Black community

The Republican Party continues to miss the mark when it comes to engaging the Black community.