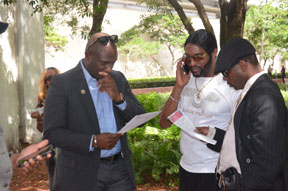 Maurice Symonette a/k/a Michael The Black Man will be making his second announcement about running for President in Broward County, Thursday, August 20, 2015 at 6:30 pm.

This Press Conference and Concert Rally will be held at Club Cinema at 3251 N. Federal Highway in Pompano Beach, FL. Other announcements will be Joe Kaufman for Congress, Eddie Jules for Broward County Sheriff & others.

Some of the noted in attendance at the press conference were: The Supremes and The Marvelettes who were there to perform. Symonette also sang a song with the live band which included famous guitarist Clyde McPhatter Jr. and blind keyboard player Ricky Williams.

Symonette stated his campaign views mostly from a biblical perspective as he talked about our taxes should be paid at 10 percent according to God’s tithing system.

“If we do it this way I feel we will have a people that will be prosperous according to Malachi  3:10,” stated Symonette.  Symonette also stated that the economy should be based on the Gold bar System in order to stabilize the economy.

“Because Isis is posing a major threat to the Black women of America, I will not have any tolerance of terrorist and the enemy Isis entering our country and they will be dealt with accordingly.

One of Symonette main campaign goals is to bring the Black Man, the White Man and the Police back together to achieve unity.

Maurice Symonette comes from a prestigious family background. His father was one of the first Five Black Millionaires in Miami, FL. His grandfather, Sir Roland Symonette was the Prime Minister of the Bahamas and was made a Knight by Queen Elizabeth. So legally speaking Maurice is a Prince. He also has a Doctorate degree.

Maurice has also opened up his Boss Mansion in North Miami every Sunday for 19 years to the community. Families enjoy jet skiing, playing in the pool and the jacuzzi, cooking on the grill and dancing to music on the private beach.

Children enjoy jumping up and down on the trampoline, playing basketball and volleyball in back of the mansion. He also provides free food for the families.  There is also a talent show on Sunday night with a live band which is posted on his TV Show and You Tube giving local talent the opportunity to be discovered. He also has a Radio Station.