Close to 100 hundred students and guests arrived dressed in red and blue to show homage to Haitian Flag Day  recently at the Meek Entrepreneurial Center. The audience was captivated as they listened to the very rich history of  Haiti and what  this history has contributed to world today. The diverse group of young adults  was impressed by the story that keynote speaker Nadege Green shared regarding her personal experience as a young Haitian American and the sometimes not too positive experiences of being Haitian American in the late 80’s and early 90’s. Nadege spoke of the inherited strength that most Haitian immigrants possess from the energy of their ancestors having won their independence in 1804, being the first Black nation to do so. 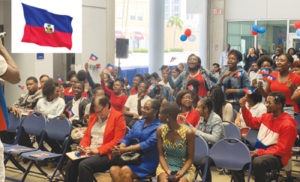 As we celebrate the Haitian culture and flag this week, it is important to remember the words on the Haitian flag, “Union Fait la Force” that can be translated as strength is in unity. Miami Dade College understands that teaching our young students about the strength of the Haitian people and the example of a nation fighting for what is right is paramount to what can happen when the oppressed put their minds and actions together.

Let us enjoy the music, food and culture of the Haitian people as well as continue to show respect to the Haitian Flag and those many lives lost in the fight for freedom.