Another year, another successful event.

The Miami Dolphins Youth Programs hosted over 1,300 student-athletes over the weekend. It was for their 9th annual Dolphins Academy Youth High School 7-on-7 Tournament.

The three-day event kicked off on Friday, June 24 inside of the Don Taft University Center arena at Nova Southeastern University. The student-athletes attended a mandatory symposium led by the Ross Initiative in Sports for Equality (RISE). The non-profit organization uses sports to unify race relations and help encourage social progress.

“For us, the symposium is really why we do the event,” Russell said. “When you look at football, to me it’s one of the greatest ways to teach kids character. When you look at the game itself, the things that you learn, outside of having fun, outside of playing the game of football and learning about football, football teaches people how to be good people. And the symposium for us is to overemphasize the character traits that you learn in football. 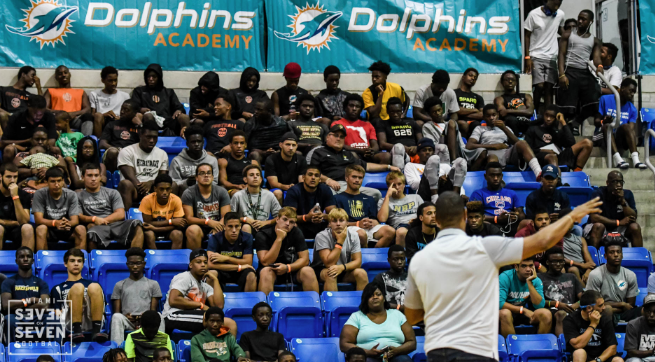 “And the 7-on-7 tournament, that’s all great. We want kids to come out and compete, but we know if we have a 7-on-7 tournament and we make the symposium mandatory that they’ll come. And our goal is to teach them about how to make great choices, if they’re in a negative situation, how do they make a positive decision in that situation?”

The tournament started by hosting 20 high schools in their inaugural competition and now has as many as 64. It also takes about six months to coordinate the entire event and bring it to life.

“It’s a reason I get to wake up in the morning and do what I get to do for the Dolphins,” said Russell. “This one event, it’s the hardest event we do, but it’s also the most fulfilling event.”

On Sunday, the championship game had two elite football programs. Carol City and Miami Northwestern once again took the stage against each other. 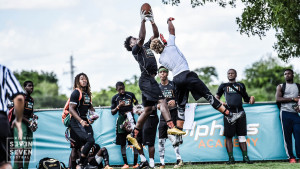 Carol City quarterback Lorenzo Floyd needed to throw one to win and he did just that.

On the last pass attempt of the game, Floyd found running back Nayquan Wright in the left corner end zone. His throw gave Carol City the 35-31 win inside of the Dolphins indoor practice facility. It sealed Carol City’s second straight Dolphins 7-on-7 championship. It also became their third title in the last four years.

Furthermore, 28 other teams competed in the youth division comprised of three age groups (10U, 12U and 14U). Miramar took home the championship in both the 10U and 12U divisions. DKC took home the first place in the 14U division.

Dolphins Edge Out A Win Against Rival Jets

The Dolphins and Jets have had a long rivalry and on Sunday, the Dolphins left New York with a victory, defeating the Jets 20 to 12 […]

Miami Dolphins: What Will They Do During NFL Draft?

Is it better to sit patiently and wait for the draft or is it better make moves before it happens? The only way to answer that question is through time and because the Dolphins have […]