Head coach Adam Gase said those words at the conclusion of the Miami Dolphins veterans voluntary minicamp. Thankfully, like rockets, the Dolphins are starting to trend upward.

If someone said that Gase wasn’t the perfect fit as a coach for the Miami Dolphins, they’d be straight up lying. That same someone would’ve thought that the Dolphins have just completely blown up their team and got a bunch of new players the way that their veterans voluntary mini-camp went. Gase, the newest member of the organization, bonded with his team real quick and learned a lot about his players during the three-day camp.

“I think the No. 1 thing I learned about is, I feel like there’s a lot of guys that want to win. Just watching them practice their not talking about it…but the fact that they’re picked up what we’ve asked them to learn in their playbook, actions speak louder than words. Right now I like where our guys are at.”

“I think the No. 1 thing I learned about is, I feel like there’s a lot of guys that want to win. Just watching them practice their not talking about it…but the fact that they’re picked up what we’ve asked them to learn in their playbook, actions speak louder than words. Right now I like where our guys are at.”

Even with the notable absences of defensive tackle Ndamukong Suh, and safety Reshad Jones, it looks like all is well in Davie, Fla. Most of the players attended the camp and the body language from camp shows that the players have enjoyed their time working out and learning from their new fiery young leader. Gase during the camp even got in the middle of drills with his players and had some fun.

“It’s something you grow to respect about it. He comes out here and actually makes it a little more fun.”

In addition to Landry singing praises about Gase, the other person who raved about his new coach was none other than Ryan Tannehill. 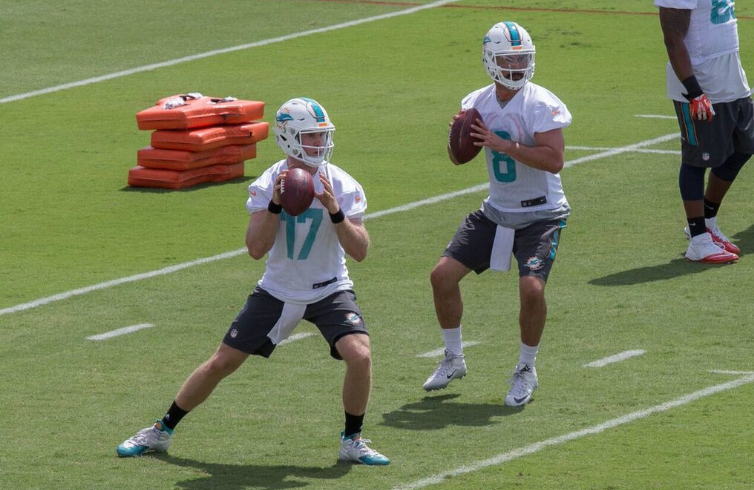 “It’s cool; when I’m throwing, he’s rushing me, making a move around in the pocket. He’s a hands-on coach. When guys see the head guy running around breaking a sweat and doing things to make us better, it creates even more of a level of respect.”

The word respect that keeps appearing from the heart of his players is something that can’t be faked. It’s only been less than a few days at camp and he’s already won over his team. For a team that lacked a lot of leadership, this was exactly what the doctor ordered.

Coming off a 6-10 season, less than a year later the chemistry of this Dolphins team is completely opposite from what we last saw and a lot of it is because Gase, in reality, is checking off all of the boxes of how to run a team.

It might be premature but the Dolphins look like they made the right decision hiring the first-year head coach Gase.

The Miami Dolphins organization continued their long-standing tradition of donating Thanksgiving meals to families in need throughout South Florida.
[…]

North Broward County Chapter of The Links, Incorporated. This year’s event ,which was co-sponsored by AARP Foundation and the Miami Dolphins ,focused on the theme ”Hidden Wealth: The Value of Home Ownership”. […]