They say that rivalry games bring out the best in you.

When the Miami Dolphins took on the New York Jets on Sunday, the game was a shootout. The only problem was each team kept shooting themselves in the foot.

In this error-filled game of, “Here, no you win the game” the home team Dolphins came victorious. With the 27-23 win on Sunday, the Dolphins have no won three consecutive games for the first time since October 19, 2014 – November 2, 2014. 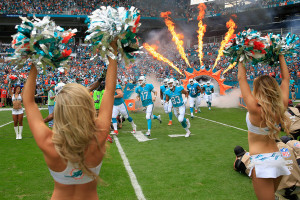 However, in spite of the errors in the game, this was one of the few games where every single facet of the team was clicking on all cylinders. The offense was led by Ryan Tannehill, and he played well.

In the game Tannehill looked accurate, he looked confident and he wasn’t forcing anything unnecessary. Tannehill looked poised and he looked like the five-year veteran that the Dolphins expected him to play like. In the first half alone Tannehill went 11-of-13, 98 yards and a touchdown finishing with a quarterback rating of 123.7.

Speaking of converting in the red zone, running back Jay Ajayi continued his torrent play. One of the biggest questions going into the game was would Ajayi become the first person in NFL history to rush for 200 yards in three consecutive games. Ayaji failed to create more history. Instead, he had his third straight game with 100 yards or more.

Also, on Sunday Ajayi became one of three NFL players to rush for a touchdown in four consecutive games. During Miami’s first red zone conversion, Ajayi once again helped Miami put seven points on the board rushing into the corner of the end zone and taking three Jets defenders with him.

Jay Ajayi is for reals pic.twitter.com/5mfZ5ol8ch

On his way to a borderline Hall of Fame career, defensive end Cameron Wake had a monster game. Wake made it a nightmare for Ryan Fitzpatrick as he kept bringing pressure the entire game. Fitzpatrick was sacked three times, hit six times, and he fumbled twice. Wake, on the other hand, was responsible for two sacks and two forced fumbles.

“He’s (Wake) going to make sure that he shows up, and if he has an opportunity to win a game, he’s going to try to do everything he can to be a part of the success of our defense,” said Dolphins head coach Adam Gase.

When Wake started getting rolling, it helped his teammates also to shine too. Defensive end Jordan Phillips also came up big as he got an interception and a run back.

The Dolphins drafted rookies Kenyan Drake and Jakeem Grant exclusively for their versatility and speed. On Sunday the New York Jets got a huge taste of it.

Drake had a 96-yard kickoff return for a touchdown which was the tied for the sixth-longest in team history.

“Everyone was running down the sideline. I think I was trying to beat him to the end zone. I was so excited for him. That was huge for him to come up (and) make a big play for the team when we needed a crucial play, and he stepped up” said Dolphins running back Jay Ajayi.

Also, during that game, Jakeem Grant almost contributed too before having his punt return called back for a touchdown because of a penalty.

The Dolphins will now have a west coast road trip as they take on the San Diego Chargers and Los Angeles Rams the road.

We’re playing some good football right now. We just have to keep progressing, keep getting better, keep pushing ourselves each and every day during practice and keep building on what we’ve done. It’s going to be fun to see how we handle that road trip like a business trip and go out and play to win two games.”

Miami Dolphins: What Happened Against Dallas?!?!

Loyalty is definitely underrated. Having people root in your corner when times aren’t going well is a blessing that not everyone has a luxury of having. It’s very seldom that you find people excited for […]