Here’s a throwback question to my Dolphins fans of the 2000’s.

Remember how awesome it was to watch Chris Chambers dominate back during the beginning of the millennium?

Chambers was so dynamic that it gave the Dolphins an explosive weapon few teams in the league had on the outside. It didn’t matter that the running game wasn’t always there because having Chambers on the outside opened up the entire field for everyone who stepped on it. Chambers was a physical specimen and the type of physical receiver that could break off his route and stiff arm his way to a 35-yard touchdown.

The last year that Chambers played for the organization was 2007 and the Dolphins have been looking for his replacement since. They’ve had some great wide receivers walk through their door such as Wes Welker and Brandon Marshall but neither stuck around for their respective reasons.

However, for as much as the team was searching for their replacement for Chambers, on this current roster they’ve now got two studs receivers who are going to enter into the prime of their career in Jarvis Landry and DeVante Parker.

In this 15-second highlight film generation, Jarvis Landry and DeVante Parker have all of the tools to become more than just a highlight reel receiving duo.

Each of the receivers who are 23-years-old could easily become the NFL’s best wide receiver tandem next year.

When the Dolphins drafted Juice Landry with the 63rd pick in the 2014 NFL Draft no one would’ve imagined that he’d become this good this fast. A lot of people knew that his skills as a receiver were good but they knew he needed to work on his route running skills. From his rookie season till now Landry has improved leaps and bounds. He’s now continuing to work on the little details of his game to get better entering into his third year in the league. With a Pro Bowl, and All-Pro selection to his name Landry still thinks he can get better.

“I just want to come out here during minicamp and practices with the guys and just improve on my technique. I want to catch more balls, have fewer drops and continue to find ways to become more explosive.” 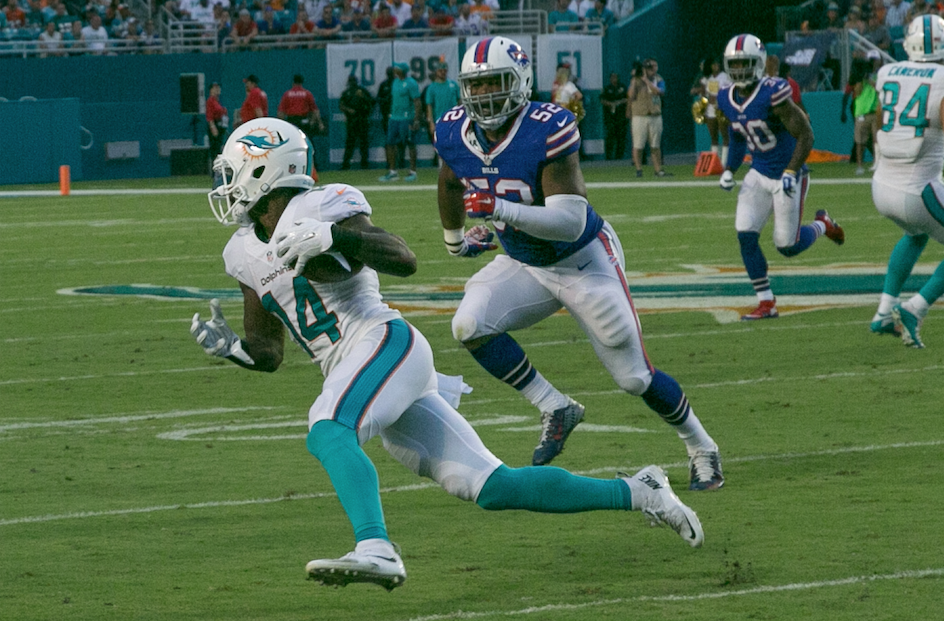 As for Landry’s running mate DeVante Parker, it’s been a long time coming to the NFL. Around this time, last season Parker was the apple of everyone’s eye in South Florida. Fans salivated at the fact that they could get a 6’3 receiver who has the same similarities in the game as Chambers.

After coming back from a foot injury in his rookie season, Parker finished the year strong as he demanded the attention of the fan base before the end the season. With his ability to make highlight plays on the field, it’s not a surprise many are looking at Parker to take an even bigger leap next year.

Even his new head coach could tell Parker is a special talent and during veterans voluntary minicamp, he spoke glowingly about his second-year receiver.

“It looks like that [rookie] year just being in a program and then getting to play some games, he seems to be a quick study. You can tell he’s pretty sharp. He’s picking up what we’re doing really quickly. I’ve been really impressed with the fact it seems every day we come in he’s on it, he knows what to do, and he’s very attentive in meetings.”

Now entering his sophomore year with a budding Landry on his opposite side, many expect the duo to have a stellar season and why shouldn’t they?

Miami Dolphins: Is Mario Williams Ready to Take Off for Dolphins?

All good things must eventually come to an end. Oh, how that saying couldn’t be truer for the Miami Dolphins. After the new deal that defensive end Olivier Vernon signed with the New York Giants, […]

Dolphins Pull Out Win Against Bengals

By Roger Paul In a game that featured absolutely putrid calls on the field by the recently-returned “professional” refs, the Dolphins managed to hold off the Cincinnati Bengals for a 17-13 win. An overall sloppy […]