If you were a car, what type of car would you be?

It was that simple question that sparked the minds of children at Barbara Hawkins Elementary School in Miami Gardens for the Miami Dolphins Gatorade Junior Training Camp.

Two of the Dolphins alumni, including Louska Polite and Troy Drayton, who’s now a Youth and Community Programs Manager with the organization, asked that question to the children. One of the children playfully responded by saying he’d be a Bugatti. Polite used the metaphor of fueling a Bugatti and related it to the human body. Just as someone would put premium gasoline inside of a Bugatti, humans should treat their bodies similar to cars and fuel their bodies with good fuel. 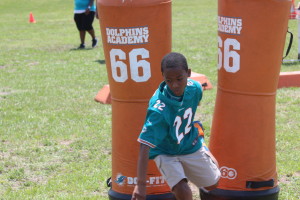 One of the biggest principles that the children learn while attending the training camp is that their nutrition is just as important as their physical exercise.

“You [kids] need to put in good fuel, the same way you put in good fuel into a car. Those foods that you put into your body are going to help you get good energy and kids really pick up on it when you put it to it them that way,” said former Dolphins tight end Troy Drayton.

In this day and age, it seems that it’s even more difficult to stimulate children’s minds especially when it comes to nutrition and fitness. During this generation where entertainment is at the touch of a button, the click of a mouse, or the unlocking of a cell phone screen, it’s difficult to show children what life has to offer them outside of the technology they’ve grown up with. What’s unique about the Dolphins Gatorade Junior Training Camp is that the children are being supervised and educated by former players and current players from the organization. They’re gleaning knowledge from some of the toughest, and most physical athletes to play sports. In the process, they get to see that going outside can be really fun, and very beneficial to their lives. 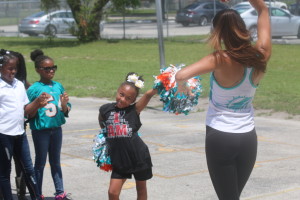 Thankfully, for the 500 or more children who are attending the training camp for the summer, it’s starting to become much easier to get them engaged into being outside and enjoying athletic competition. The Dolphins are doing a great job of keeping the minds of the children motivated on athletic competition by hosting their own Super Bowl for the youngsters participating in the summer camp. Each week in the summer camp, each age group from 7-9, 10-12, 13-15 will get a chance to play in a round robin game for a Super Bowl ring.

Additionally, young women are also encouraged to participate. Either they can sign up for the athletic competition like the young men, or they can go learn from the wonderful Miami Dolphins cheerleaders.

“Summer Camp is beneficial because you’re able to reinforce everything we talk about during the school year…We just tell them that exercise and eating right will help you live a long time,” said Drayton.

As long as the Dolphins continue to push the youth movement by showing children going outside is fun, it could lead to helping them a long way down the road in their lives.

The Miami Dolphins preseason game against the Tampa Bay Buccaneers signifies one thing, that it’s only one more week until the Dolphins regular season will kick off. On September 13th against the Washington Redskins, the […]

The Miami Dolphins and Publix came together to take 125 students from four schools in the tri-county area shopping for Thanksgiving meals. […]

What if you were drowning and you had to fight for every piece of air; What would you do? Dolphins by nature aren’t animals that drown in water. In fact, they’re the opposite, they embrace […]