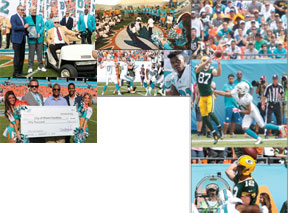 Miami Dolphins highlights from an eight and eight season

Former Dolphins Defensive Tackle Manny Fernandez Honor Roll Induction at Halftime — (Opening statement) – “I want to thank everybody that’s here today and I’m looking forward to this game being a Dolphin win, they love to come from behind. This is an honor I never expected or really thought four years ago, when I went into the Walk of Fame, that’s where it was going to end. But here I am. I have so many people to thank. I want to start with Mr. (Stephen) Ross for just putting together a spectacular week for me and the other alumni and members of the Dolphin family. It’s been a great week, this is a great day and I am extremely humbled to join all of the names up there in this Honor Roll. A very, very special day in my life, only second to January 14, 1973. I’m looking forward to the day when we’re going to be back there. Thank you all for being here today. A real quick special thanks to my wife Marcia, who after 41 years is still with me, here today, and has spent so many nights with ice packs, heating pads and massages and keeping me going week-to-week, love you.” L-r: Jarvis Landry, Brandon Gibson, Samson Satele, Brian Hartline, Terrence Fede, Jordan Kovacs, Ja’Wuan James, Jason Fox, Ryan Tannehill, T.J. Heath, Mike Pouncey, Caleb Sturgis and Brandon Fields.

Miami Dolphins Distribute Toys to Miami-Dade, Broward and Palm Beach County Students — Several Miami Dolphins players, coaches, cheerleaders, Miami Dolphins Women’s Organization (MDWO) members and mascot T.D. welcomed 125 students from Miami-Dade, Broward and Palm Beach County partner schools to the team’s training camp facility for a holiday toy event. “It’s exciting to be out here, to be able to give back to the community. We’re putting a smile on these kids’ faces for a wonderful holiday,” said G Mike Pouncey. Pouncey was joined by 15 of his teammates for the event, including John Denney, Terrence Fede, Brandon Fields, Jason Fox, Brandon Gibson, Brian Hartline, T.J. Heath, Ja’Wuan James, Reshad Jones, Jordan Kovacs, Jarvis Landry, Samson Satele, Caleb Sturgis, Ryan Tannehill and Jason Trusnik. The evening concluded with MDWO members and players distributing presents. Each kid provided a toy wish list with items they would like for the holiday. Players and coaches, along with MDWO members, collaborated together to fund the entire event and provide the toys that were given. All students also received a tablet.

GRIMES AND WAKE NAMED TO PRO BOWL — Miami Dolphins cornerback Brent Grimes and defensive end Cameron Wake have been selected to the 2015 NFL Pro Bowl squad, the NFL announced. The annual contest will be played on Sunday, Jan. 25, 2015 at University of Phoenix Stadium in Glendale, Ariz., site of Super Bowl XLIX. The game will be televised live on ESPN at 8 p.m.