There really is no cheat code, no explanation, or any piece of advice that anyone could give an opponent who has to go against the Heat because when they playoffs roll around this franchise turns into a different animal. Someone should’ve passed that memo along to the Charlotte Hornets before they played inside of the American Airlines Arena in their opening game of the playoffs on Sunday. There was no way the Hornets could realize what they were in for when they were awarded the No. 6 seed in the Eastern Conference and being awarded a trip to Miami.

What was impressive about the victory was the way that Miami played during the contest, easily looking like the best team in the Eastern Conference out of the four playoff games that were played. Outside of the Golden State Warriors, there weren’t much more impressive teams outside of the sunshine state.

In an impressive fashion, Miami stormed out to a huge 19 point lead early in the first quarter and never looked back and a huge part of that goes to the two biggest stars of the night, Luol Deng and Hassan Whiteside.

Before the game, if someone would’ve said that Deng would be the leading scorer for each team and Miami would win by more than 20 points, there would be no way you’d believe them. However, on Sunday night, that is exactly what happened and Miami was clicking on all cylinders as they got their biggest contribution from their sixth leading scorer on the roster. 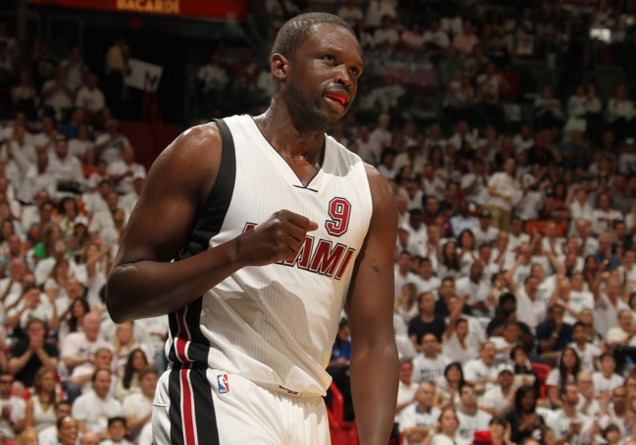 Deng was on fire against Charlotte and took advantage of the fact that Nicolas Batum was guarding Joe Johnson and Dwyane Wade for most of the night allowing him to have the bigger advantage. Deng did exactly that and took advantage of his defender as he finished with 31 points, seven rebounds in only 33 minutes. Deng also had an awesome shooting night going 11-of-13 from the floor including 4-of-6 from the three-point line.

“We know how good we can be; there are games we’ve shown that. The game in Boston, we got up in the first half and looked great. We’ve got a lot of guys who can score, but right now we’re so unselfish. And we just know that every night is about winning the game. It’s going to be a different guy every night and we accept that.”

Additionally, we have to give a ton of credit to Miami’s center Hassan Whiteside who should be in the running for the Most Improved Player of the Year award. In his first playoff game, Whiteside looked just as dominant as he did during the regular season as he ended the game with 21 points, 11 rebounds, two steals, and three blocked shots. Whiteside had a huge impact when it came to getting the crowd involved because it seemed like every time he scored he was dunking the basketball which got the fans inside of the American Airlines Arena fired up.

“We just knew it was time to play Miami Heat basketball. We’re in the playoffs. It’s all or nothing. Just leave it all out there. We came out and played our hearts out as a team. We’re just going to try to keep it rolling.” 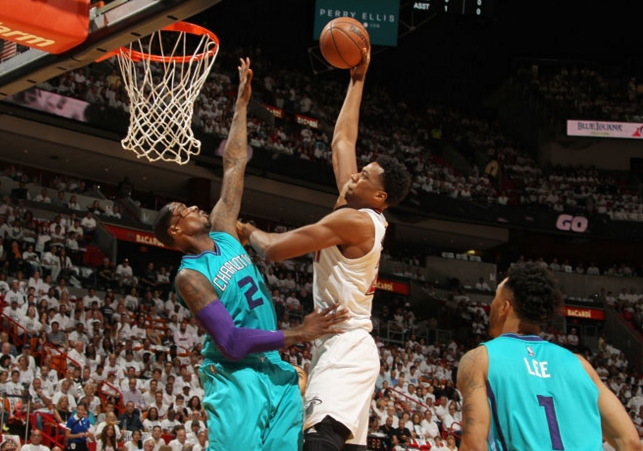 Moreover, those two individual performances don’t overshadow how dominant Miami was from the opening tip. Miami shot the basketball at 57.6 percent from the floor, 50% from the three-point line, they turned the basketball over only six times, the forced Charlotte into 11 turnovers, they outrebounded Charlotte by 14 (42-28), and they scored an insane 56 points in the paint.

If Miami can get performances even close to this again, not only will they sweep Charlotte, they’ll most likely find themselves in the Eastern Conference Finals for an impending matchup with the Cleveland Cavaliers.

Miami Heat: Why You Should Slow Down With Hassan Whiteside Expectations

When is enough, enough? Two NBA championships, over 17,000 career points, being recognized as an All-Star every year since 2006 for a grand total of 11 times, an All-NBA selection, and being identified as the […]

Everyone expects the Miami Heat to compete for the Eastern Conference Championship this year, and their expectations are realistic. One of the reasons is because of the way that the roster is constructed. The Miami […]