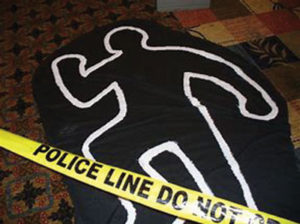 http://bandarbaju.com/tag/konveksi-kaos-salur-anak?s= The annual study, Black Homicide Victimization in the United States: An Analysis of 2015 Homicide Data, ranks the states according to their Black homicide victimization rates. It is based on unpublished data from the Federal Bureau of Investigation (FBI) Supplementary Homicide Report (SHR). The study details homicide rates for 2015, the most recent year for which comprehensive national data is available. This is the 12th year the Violence Policy Center has released the study.

“Each day in America, the number of Black homicide victims exceeds the toll in the Parkland, Florida mass shooting. And just like Parkland and other mass shootings, these deaths devastate families, traumatize whole communities, and should provoke an outcry for change. The devastating and disproportionate impact homicide; almost always involving a gun, has on Black men, boys, women, and girls in America is an ongoing national crisis. We hope our research will help educate the public and policy-makers, spur action, and aid community leaders already working to end this grave injustice,” states VPC Executive Director Josh Sugarmann.

http://bisnisbajumu.com/2017/05/pusat-grosir-setelan-vanessa-pp-anak-perempuan-murah-25ribu.html “The daily toll of gun violence in communities of color is a major failing by our elected officials and society. No one law is going to end gun violence in America, but this report demonstrates the urgency to research and address why black men are needlessly dying at such elevated rates. In addition to closing loopholes in our current gun laws, we must invest in community-based prevention and collaborative policing programs,” states Nick Wilson, interim national director of States United to Prevent Gun Violence.

The 10 states with the highest black homicide victimization rates in 2015 are detailed in the table below.

Discount Xanax Online For the entire UNITED STATES, the study finds that in 2015:

The FBI data includes incidents reported as justifiable homicides of Black victims killed by law enforcement. Nationwide, there were 121 such incidents reported in 2015. The data does not specifically identify killings by police that are not ruled justifiable. In December 2015, the FBI announced that it would dramatically expand its data collection on violent police encounters by 2017. In October 2016, the U.S. Department of Justice outlined a plan to improve the collection of law enforcement use of force data.

Generic Xanax Online Lewis was not just shot and arrested, his constitutional rights were denied. Court re-cords show (case#14-523-iLG) Oswald’s paid attorney was de-nied the right to be his counsel or act as his standby. Lewis was then forced to represent himself and yelled out in court, “You’re not giving me a fair chance to defend myself.”

The record shows the ma-terial evidence from professor peter Deforest was also pre-cluded and Mr. Lewis never got an opportunity to testify or cross examine all the law enforce-ment on the government wit-ness list who made prior incon-sistent statements. Lewis’ most crucial evidence to prove his in-nocence was precluded because the court appointed attorney (whom Lewis fired) filed the motion for the witness late. Even considering the exculpa-tory findings the forensic expert revealed, and the serious charges Lewis faced, the court never considered the material testimony.

Three affidavits in support of Mr. Lewis (2255 appeal) to vacate his conviction have been submitted. See more on the Lewis case and video at www.oswaldlewis.com.

In over 60 years, the issue of law enforcement brutality shows no improvement and is still unresolved. The current trend shows there’s a continuous tendency to stereotype Black people as being more dangerous than other races. With that attitude, there’s a reliance upon force that goes beyond what is necessary to accomplish police duty. This is the dangerous culture of law enforcement that helps foster the problem.

Culturefest Connects the Black Diaspora with an International Music Fest

http://artists-atelier.com/school-report-2011-chateaux-painting-holidays-sw-france      Scheduled to launch June 8 at the National Harbor, from 1–9 p.m., Culturefest features international artists, including Reggae icons Aidonia; Romain Virgo & The Unit Band; Tanto Metro and Devonte; and SOCA superstars Patrice Roberts; Skinny Fabulous; and Afrobeat legend Timaya and the image band. Culturefest’s Co-founder Freka Scott says, “This one, will be one for the books.” […]

‘Too many people are not thankful anymore’

http://grosirrumahan.com/grosir-daster-jumbo-20ribu-murah-meriah.html ‘Too many people are not thankful anymore’