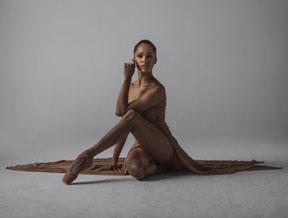 By Zita Allen, Special to the NNPA from the New York Amsterdam News

When American Ballet Theatre announced the promotion of Misty Copeland to principal ballerina last week, the highest rank in the company and the highest ever achieved by an African-American dancer with one of this country’s elite ballet companies, she told reporters at a press conference, “I’m just so extremely honored to be a principal dancer, to be an African-American and to be in this position.”

Occasionally fighting back tears, she spoke softly with humility and grace at what was clearly an emotionally charged moment. Her promotion had just been announced that morning at a company meeting with Artistic Director Kevin MacKenzie, who said simply, “Misty, take a bow,” as her fellow company members applauded.

Copeland explained that starting to dance at age 13, at the Boys and Girls Club in California, where she grew up, was not your typical path into that corner of the dance world where few looked like her. “The first person who looked like me that I saw dance Odette/Odile [the lead role in ‘Swan Lake’] was Lauren Anderson of the Houston Ballet,” she said. Later, she would meet others, such as Raven Wilkinson, the only Black ballerina with the Ballet Russe de Monte Carlo back in the 1950s, whose experiences included harrowing confrontations with the Ku Klux Klan during company tours down South.

Copeland continued, “I think I would have had a completely different path had there been more like me. I’ve had moments of doubting myself and wanting to quit because I didn’t know. I didn’t think there could be a future for me as an African-American woman to make it to this level.”

“At the same time, it made me hungry to push through and make way for the next generation. This is not about just me. I’m constantly saying that it’s about everyone who came before me that got me to this position, and all the little girls that can see themselves through me, it’s given them a brighter future.

“I think it makes their dreams seem more tangible. … Now, for them, I think it’s going to push them to keep striving. So many young dancers of color stop dancing at an early age because they don’t think there could be a career path for them.”

Her voice cracked as she added, “For me, I just have to remember why I’m getting the attention that I’m getting. It’s because of my dancing. It’s because I’m a ballerina and no other reason so that has to remain my focus. And in spite of everything that’s happening, I go to ballet class every morning. I work my butt off eight hours a day because I know I have to deliver when I get on stage. I have to go out there and perform live every night and prove myself maybe more so than other dancers because people might be thinking, ‘Why is she getting all this attention? Is it really based on her dancing?’ All of these things have come into play, especially this season, so it’s a lot on my shoulders … to have people judging and reviewing me when it’s your first time. But I’m just taking it one day at a time, one role at a time, one performance at a time, and I’m just trying to stay as focused as I can be and hopefully represent ABT in the best way that I can.”

It hasn’t gone unnoticed that Copeland’s sold-out performances have attracted a newer, more diverse audience to American Ballet Theatre performances. And the energetic enthusiasm of the crush of young fans who wait at the stage door for autographs has been remarkable. The same goes for the social media explosion that greeted the news of her promotion.

Tuesday, Copeland shared with her 500,000 Instagram followers a short video of when she got news of the promotion. Facebook, Twitter (@mistyonpointe and #weloveyou) and Instagram exploded with congratulatory messages from fellow dancers and others, including Prince, Katie Couric, Star Jones and Hillary Clinton. Ballerina Julie Kent’s post got 32,000 likes and 2,471 comments in a matter of minutes. Eighty-years-young ballerina Wilkinson was ecstatic when she got the news very early, saying that even though she doesn’t have any of those newfangled devices, her phone was ringing off the hook.

While she doesn’t yet know which leading roles she will be dancing, audiences eager to see Copeland perform in her new exalted position as principal ballerina will be able to do so during the American Ballet Theatre’s upcoming fall season at the company’s home in Lincoln Center.

We should not wait for another one of our heroes to be killed before we stand up to take action to prevent this plague of violence from continuing. Nipsy was a great example of what can happen when a young man from our community puts his head down and transcends the traps that are laid by the enemies of our youth in America. […]