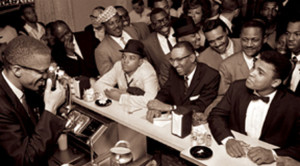 Malcolm X photographs Muhammad Ali after his victory over Sonny Liston in 1964.

Muhammad Ali’s historic win against George Foreman in Kinshasa, Zaire in 1974 was perhaps the greatest of all of his ring victories. Ali dropped Foreman in the eighth round of that heavyweight bout known as “The Rumble in the Jungle.” Foreman was among the first to pay homage to the fallen champion when news of his death spread late Friday evening on June 3. He was 74.

Foreman tweeted, “It’s been said it was ‘rope a dope,’ Ali beat me with no his beauty that beat me. The most beauty I’ve know loved him.”

After a long battle with Parkinson’s disease, the world-renowned champion died at a Phoenix, Ariz.-area hospital. The iconic sports figure was fighting respiratory issues that were complicated by the Parkinson’s that he was diagnosed with in the 1980s, the Associated Press reported. Ali had been hospitalized several times in recent years.

Ali’s family also thanked the public for the outpouring of support.

“The values of hard work, conviction and compassion that Muhammad Ali developed while growing up in Louisville helped him become a global icon,” Fischer said in statement released on Twitter. “As a boxer, he became ‘The Greatest,’ though his most lasting victories happened outside the ring. Muhammad leveraged his fame as a platform to promote peace, justice and humanitarian efforts around the world, while always keeping strong ties to his hometown.”

Fischer continued: “Today, Muhammad Ali’s fellow Louisvillians join the billions whose lives he touched worldwide in mourning his passing, celebrating his legacy, and committing to continue his fight to spread love and hope. Thank you, Muhammad, for all you’ve given your city, your country and the world.”

“Like everyone else on the planet, Michelle and I mourn his passing,” Obama said in a statement. The President said he keeps a pair of Ali’s gloves on display in his White House study. “But, we’re grateful to God for how fortunate we are to have known him, if just for a while; for how fortunate we all are that ‘The Greatest’ chose to grace our time.”

As beautifully chronicled by journalist Maureen Callahan in a 2015 New York Post article, defying the American government, Ali traveled to Iraq, where 15 Americans were being held hostage by Saddam Hussein in the run-up to the Gulf War: “As with much in Ali’s life, his mission was misconstrued and criticized. President George H.W. Bush did not approve. ‘I basically believe these people are playing into the propaganda game that Iraq is holding here,’ said Joseph Wilson, then the top American diplomat in Baghdad. ‘These people traveling to Iraq are making a serious mistake.’”

The New York Times also took jabs at the champ over his efforts to free the hostages.

Philip Shenon wrote in The New York Times: “Surely the strangest hostage-release campaign of recent days has been the ‘good-will tour’ of Muhammad Ali, the former heavyweight boxing champion…he has attended meeting after meeting in Baghdad despite his frequent inability to speak clearly.”

At that point, Ali was 48 years old and had been suffering from Parkinson’s disease for six years. One week into his rescue mission in Iraq, Ali ran out of his Parkinson’s medication, the New York Post re-ported.

According to the New York Post: “’He could barely get out of bed,’ Vernon Nored, [who was Ali’s liaison from the U.S. Embassy], told ‘30 for 30.’ ‘He couldn’t stand up. And he couldn’t talk, because his voice wouldn’t go above a whisper.’”

Against overwhelming odds and outside pressure, Ali secured the release of all 15 American hostages.

“Muhammad Ali was not only a champion in the boxing ring, but he was a champion of human and civil rights,” said G. K. Butterfield, the chairman of the Congressional Black Caucus. “During a difficult time in American history he stood on principle to end racism and bigotry. In doing so, Ali showed the world how a true champion can stand with courage, self-respect, and dignity.

Butterfield added: “Muhammad Ali made a considerable impact on the world and his spirit and his work will live on for generations to come. On behalf of the Congressional Black Caucus, we send our deepest condolences to his family, and we mourn the loss of a true American hero.”

“We extend to the Ali family our heartfelt condolences. Representing the Black Press in America and throughout the world, the NNPA affirms Muhammad Ali’s outstanding world-class achievement, leadership and courage in boxing, human rights and philanthropy,” said NNPA President Dr. Benjamin Chavis.

Chavis continued: “Ali personified power and genius in the ongoing cause and struggle for freedom, justice, equality and empowerment. We now rededicate to keep his audacious voice and powerful legacy alive in all that we say, print, report and distribute. Long live the spirit of Muhammad Ali.”

The Washington Informer is a member publication of the National Newspaper Publishers Association. Learn more about becoming a member at www.nnpa.org.

Florida U.S. Senate Democratic race Candidate Pam Keith is coming out of the shadows to fight for your vote

In her contact with voters she says she hears their concerns and desires of “wanting to have more money in their pockets by supporting the $15 minimum wage increase and having a concern for our national security.” In which she stated she agrees with both of the concerns and desires expressed by those voters.  Her platform includes many other issues with these having priority: Veteran Affairs in how Vets are treated upon returning home due to the bureaucracy of the Veterans Administration (VA) system in processing them for benefits; Criminal Justice Reform for the over incarceration in our prisons of crimes that shouldn’t mandate criminal convictions which is draining our tax dollars and creating the increase in the privatization of our prison system; and medication cost for our elderly.  These issues are concerns not only for Florida residents, but resonates nationally also.

Keith is an attorney by profession and has gotten a personal glimpse of our military operations up close on land, in the air and at sea while stationed in the Persian Gulf as an officer-in-charge of the legal services office while U.S. Armed Forces maintained the no-fly zones over Iraq under Saddam Husseins’s reign. She is very vocal about her beliefs on other issues also, such as unemployment and securing our borders in how we process and keep track of those entering our country. Has this become the prototype of topics for all new candidates to pander to the disenfranchised voters? Politics have become unpredictable regardless of what polls initially indicate, so you can’t count a candidate out of a race due to not having as much name ID recognition as their opponents. Democratic Senate Candidate Keith is not even mentioned as a candidate in the race by her opponents or most general market media. It is not a valid dismissal of her candidacy before the race is a done deal.  At least that is the fight Democratic Senate Candidate Keith is putting forth in getting her name in the spotlight for more recognition to get the votes to finish the race as a winner! If given the opportunity to represent our state she replied “No candidate can be for one community, you cover the boundaries of north, south, east and west.”   As one who has advocated for written policies that has served many of our minority communities, she believes the power lies within the people she will serve with her being a tool of change in representing them in the resolution. Her campaign mission statement states: “To represent the millions of Floridians who consider themselves socially liberal and fiscally responsible. To represent the interest of Florida and those who live here…..and to propose real solutions to the problems that face the Nation.”

Democratic Candidate Keith is the daughter of an U.S. Foreign Service Officer and grew up in places like Morocco, then Syria, California, Kentucky and Brazil. She was born in Turkey and speaks three languages fluently – English, French and Portuguese. Obtained her undergraduate and graduate degrees from the University of California at Davis, and went on to attend Boston College for a law degree while she also applied to the U.S. Navy Judge Advocate General’s Corps and was accepted. She became a labor attorney after leaving the Navy and practiced at nationally known law firms. She moved to Florida in 2011, and to South Florida less than a year ago. She is not married and doesn’t have children. She lost her mother but is still supported by her father and brother. She is a member of Alpha Kappa Alpha (AKA) Sorority.

Her motivation to get up and run this race was prompted by a seed that was planted in a thought that flourished into her taking action and following the spiritual direction she felt she received to be a servant of the people. So she professes, the incentive wasn’t that she would become Florida’s first Black female U.S. senator! She is often unscripted in her impromptu or scheduled speeches, which has garnered her favorable credence and like-ability of potential voters and supporters that hear her message.  Sort of reminds you of an unknown candidate on the national scene eight years ago that was labeled in the same manner as an underdog and won the Presidency! Democratic Candidate Keith will keep revealing her-self to more and more voters until the race is won by the choice of the voters and not the political strategist, liberal progressive base or Democratic establishment that has told her she is not a favorable pick to win!  Ms. Keith says, “In running this race it has made me more humble, spiritual and patriotic. I have become a better listener in hearing the stories of people lives of survival and their desperate cry for a change in the establishment to help them live better matter.  Most importantly from this experience is that I want voters to know I am a choice for that change when they vote in August.”

Low-income children to get shafted by congress

Low-income children to get shafted by congress
[…]