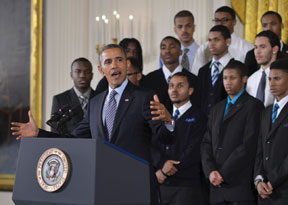 WASHINGTON, D.C. (NNPA) – While political pundits rush ahead to the 2016 presidential election, President Barack Obama is rallying private-sector, philanthropic and community leaders to launch an independent non-profit to ensure that the My Brother’s Keeper (MBK) Initiative lives past his second term in office.

That initiative and its mission to expand opportunities and improve life outcomes for young men and boys of color will live on as the My Brother’s Keeper Alliance.

During the launch ceremony of the Alliance at Lehman College in West Bronx, N.Y., President Obama said that the group aims to double the percentage of boys and young men of color who read at grade level by the third grade, increase their high school graduation rates by 20 percent and get 50,000 young men into college or post-high school training.

“I notice we don’t always get a lot of reporting on this issue when there’s not a crisis in some neighborhood. But we’re just going to keep on plugging away,” said President Obama. “And this will remain a mission for me and for Michelle not just for the rest of my presidency, but for the rest of my life.”

The MBK Alliance will also develop a guide to help mobilize private sector leaders to address the myriad challenges facing young men of color and provide seven million dollars in grants to evidence-based programs and another $15-$25 million to support communities in building capacity for those programs and local infrastructure.

In a letter to supporters and community stakeholders, Broderick Johnson, the chair of the MBK Task Force at the White House, said that he looked forward to the focus that the Alliance would bring to tearing down barriers facing under-served and at-risk youth.

Johnson said that the task force is working with the Education and Health and Human Services Departments to ad-dress the disproportionate impact of preschool suspensions on students of color and with the Labor Department to help young people gain work-related skill on a pathway to careers.

Johnson also noted that the Justice Department the President’s Task Force on 21st Century Policing are working to promote community-oriented policing practices and to improve life outcomes for young people that encounter the criminal justice system.

Leroy Hughes, Jr., the interim executive director of Concerned Black Men National, a group that provides mentoring p4rograms and supports career and academic achievement for young boys of color, said that instead of just throwing funding at the issue, building a strong foundation through the initiative, defining the problems and likely solutions in two separate reports and issuing the community challenge last year helped to put all of the pieces together for a long-term strategy.

“I think it was a smart move, because they can actually talk about real issues affecting Black men and boys now,” said Hughes.

And addressing those issues can lead to real economic benefits for the nation.

A fact sheet released by the Alliance said that just one disconnected young man costs society nearly $1 million over his lifetime.

“High school graduates pay more taxes, draw less from social welfare programs and are less likely to commit crimes than drop-outs,” stated the brief. “Research shows that closing the achievement gap between young men of color and their peers could increase the annual GDP by as much as $2.1 trillion.”

Hughes said that launching the Alliance puts the onus on the community to become proactively engaged and by reaching out to corporate America as well as those in the philanthropic sector, separate and apart from the federal government, speaks to the Obama administration’s effort to get all of us to buy in to the program.

“That’s one of the most invaluable aspects of this particular alliance: that it is separate and apart from government and that it’s not governed by political ideology. So, we consider that a strength,” said Hughes, adding that a partnership like the Alliance has the potential to open doors to more resources and more funding so, that groups like CBM National can expand the services that they provide and further support the goals and objectives of the Alliance.

“We’re seeking solutions, not simple engagement,” said Hughes. “We understand the long-term implications of dealing with these kids. We have to make sure that our efforts can be quantified, so that we can apply lessons learned and help more children.”

Cornell William Brooks, president and CEO of the NAACP, applauded President Obama for launching the MBK Alliance in an effort to ensure the sustainability of the MBK Initiative.

“My Brother’s Keeper Alliance will serve as a helpful tool in placing more young men of color on a path to success. These young men will become our nation’s leading entrepreneurs, scholars, lawmakers and law enforcement officials,” said Brooks. “Just as the GI Bill fueled the growth and development of thousands of young people a generation ago, today’s young people deserve our investment today. “

Brooks continued: “As our nation begins to address the unrest wrought by racial profiling in cities like Ferguson, Cleveland and Baltimore, the NAACP looks forward to working collaboratively with My Brother’s Keeper Alliance to ensure that all young men of color are maximizing their full educational and professional potential.”

Sammie Dow, the youth and college director of the NAACP echoed the praise that Brooks offered and said that the success of our country is contingent upon our collective ability to educate all of our children and position them for success.

“Too often, young men of color are forced to overcome impossible odds in the face of low expectations,” said Dow. “Our hope is that the newly announced Alliance will create an abundance of educational and professional opportunities for young men of color throughout the nation, and equip them with the training, resources and support they need to be high achievers.”