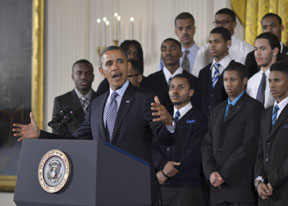 WASHINGTON, D.C. (NNPA) – Though still in the early stages, President Obama’s special task force on Black and Latino males has discovered that part of their challenge will be to get males of color to reject negative images others have of them, according to  a 60-page report detailing recommendations and policy proposals aimed at improving life experiences for the group.

“Though disproving the prevalent negative narrative about boys and young men of color with their own example, these young men often made two heartbreaking admissions,” stated the report. “First, that they had internalized parts of the negative narrative and thus (at times) felt the shame of being fearful of other boys and young men of color; and second, that they often diminish themselves as they go through their daily lives to be less threatening to others. The prevailing narrative is pernicious and corrosive. It feeds and excuses bias.”

“One of the compelling lessons we’ve learned from these sessions is that these boys and young men of color want to be heard and they deeply appreciate the fact that this president and his administration are listening to them,” said Broderick Johnson, cabinet secretary of the White House and the chair of the My Brother’s Keeper Task Force.

According to the MBK report, Blacks raised by single moms are 75 percent more likely to drop out of school.

The plight of Black males has been heavily documented.

“In 2012, Black males were 6 times more likely to be imprisoned than White males,” stated the MBK report.

Despite research that shows that Blacks and whites use and sell drugs at similar rates a disproportionate number of Black males are arrested, sentenced and serve time in prison for non-violent drug offenses.

The report said that working with employers, mayors and others to expand successful summer jobs efforts, would help teenagers and young adults build “soft skills,” including  punctuality, teamwork and interpersonal communication that enhance future job prospects.

The report also suggested reforming juvenile and criminal justice systems and a “Ban the Box” proposal to make it easier for ex-offenders to find employment.

As the My Brother’s Keeper program moves forward, the outcry for a similar initiative focused on the needs of girls and young women of color has grown louder.

Suspension rates for Black girls are far greater than their White counterparts. By the time they reach their 18th birthday, more than half of all Black women have been sexually assaulted. Black women also suffer higher rates of domestic violence and murder than other women.

Recently, more than 200 Black men – scholars, pastors, educators and civil rights advocates – signed an open letter to President Obama expressing their concerns about the need for a similar program dedicated to the unique plight of girls and young women of color.

The letter said that the men were “surprised and disappointed” that the president’s commitments and special focus on the young Black boys and men only focused on half of the community, seemingly leaving Black girls and young women to fight their own battles.

”Simply put, as Black men we cannot afford to turn away from the very sense of a shared fate that has been vital to our quest for racial equality across the course of American history,” stated the letter.

Jarrett, who chairs the Council on Women and Girls, created in March of 2009 shortly after President Obama took office, said that addressing the challenges facing girls and young women is a very personal issue for the president and that many of the issues that are important to women of color have been tackled in the course of the council’s work. Jarrett added that the administration has been focusing on girls since practically day one and for the president it is very personal because he’s the father of two daughters.

“We have been working over the last five and a half years on issues that are important to women and girls in all of our programs all of our policies and all of the legislation that we support,” said Jarrett.

“If we’re going to be successful for all kids, we have to pay deliberate attention to young men and boys of color, because that’s what the data shows,” said Cecilia Muñoz, White House Director of Domestic Policy.

Muñoz said that the strength of the nation, domestically and globally depends on the full participation and contributions of young men and boys of color and that notion fits right in line with the broader economic agenda that the president has laid out.

However, critics say that even with the work done by the council, no major program has emerged for Black women and girls and certainly none on par with My Brother’s Keeper.

The administrations officials argue that even MBK should be vieweded in the context of other work.

Muñoz explained, “So, when we’re advancing things like ladders of opportunity in Promise Zones, investing in infrastructure, advanced manufacturing, job training and raising the minimum wage that pays dividends for the country, it pays dividends for all of us as a whole and it will improve prospects for boys and young men of color.”

God understands when you feel angry

But when we acknowledge the deep rooted hurts we have experienced and begin to understand, that we alone cannot make right the wrongs that have happened to us, we can release the hurt and bitterness we feel into the hands of God which is essential to our personal healing […]

Answering the President’s call with My Brother’s Keeper

Answering the President’s call with My Brother’s Keeper
[…]