Delucca “Lucca” Rolle, the 15-year-old high school student who was punched and had his head slammed against the concrete by law enforcement officers last month, joined his attorney and several prominent civil rights activists in a peaceful demonstration in Florida to denounce police brutality.

Rolle and others chanted, “Justice will be served,” as they marched toward New Mount Baptist Church in Fort Lauderdale.

“Our children’s lives matter. No one seems to understand that but us,” said Fulton, whose unarmed son, 17-year-old Trayvon, was shot and killed in Miami Gardens in 2012 by neighborhood watch captain George Zimmerman simply because he “looked suspicious” and was wearing a hoodie.

“So, we have to fight for our children,” Fulton said.

The NNPA was “pleased to join in with the NAACP, Black Clergy, and Florida elected officials to protest the racially-motivated and vicious police assault on Delucca Rolle in Fort Lauderdale,” said Chavis, a longtime civil rights activist and member of the famed Wilmington Ten, a group who were wrongly arrested and convicted in 1971 of various charges.

After serving nearly a decade in prison, Chavis and the group were exonerated and ultimately pardoned.

Last month, Rolle, an African American, was pepper-sprayed, punched and had his head slammed County Sheriff’s deputies Krickovich and Sgt. LaCerra, who are white.

Rolle suffered a fractured nose in the incident which occurred after the teen attempted to recover a cell phone of another teen after a fight.

The incident was caught on video and sparked a firestorm after it was shared on social media.

Sheriff Greg Tony suspended the two officers, but many, including some local elected officials, said they should face criminal prosecution.

“We will not stop until those officers are fired and charged,” Broward/Fort Lauderdale NAACP president Marsha Ellison said.

“We will remember the choices [Tony] makes when it comes to justice for Lucca,” Ellison said of the sheriff who, like the local District Attorney, is up for re-election in 2020.

Henry, whose Westside Gazette newspaper has continued to be a strong voice for the African American community throughout Broward County, said attending the march and calling for justice for Rolle is important.

“To have an iconic Black History freedom fighter in Dr. Benjamin F. Chavis, Jr., to join us in this march was like a step back into time when Black people felt important, stood up for each other and weren’t going to let anyone turn us around,” Henry said.

“Say it loud, I’m Black and I’m proud, was a shot to the bodies that vibrated to the core as everyone  – Black, white, brown, young and older, male and female, were in unison in reaffirming our pledge to continue our fight for justice against police brutality,” he said.

“We will march from the streets right into the court houses. This was a wake-up call and it ain’t over yet.” 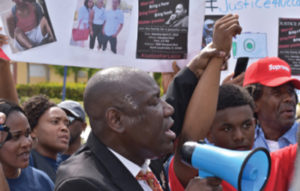 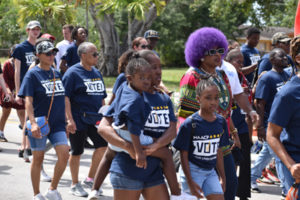 The community has a right to know what to expect from the law enforcement community. The contents of the video demand a comprehensive response from our Sheriff. —Rev. Wayne Lomax Sr pastor of The Fountain of New Life Church, Miami Gardens, FL 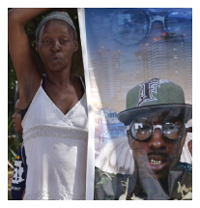 I think they just need to know how important it is for us, our kids and the ones to come. If we have faith we have to be prepared to put in the work. We must also remember Gods spirit is stronger than any flesh so our relationship with our Heavenly Father will determine our future. We are together but we are all individually judged. His Love is Loyal so if you keep it real with Him he will Be there for you. I know from my own experience. —Diesel 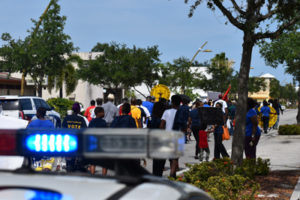 The march was a grave reminder that as far as we have come, we still have a long way to go as we continue to bend the arc of the moral universe towards justice for our people. 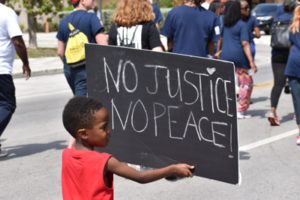 I have seen thousands of cases where our people are arrested with far less evidence or solely on the word of the police. The evidence is overwhelming and abundantly clear in the Lucca Rolle incident — the officer crossed the line. The Broward Sheriff’s Office must act with deliberate speed to remove these officers and the State Attorney’s Office must follow suit and send a clear message that police misconduct will not be tolerated. Anything less is a clear message to the community that they condone this type of behavior. —Broward Public Defender, Attorney Gordon Weekes

When do we address the social determinants? We must remain focus on the root cause of the disrespect for Black people. The diverse community must be engaged in the process, the solution for our efforts to be taken seriously. Love the engagement of our young people on Sunday.— Hazelle P. Rogers Mayor, City of Lauderdale Lakes, FL.

We cried out with pride and fearlessness against brutality, against lawfulness, and against the abuse our black people have endured for centuries. Our entire community has witnessed that racism and discrimination still exists for anybody at any age and it is up to us to demand change. For the first time in years, young people, mothers, fathers, elected officials, and leaders marched together for a common goal: equality. I watched on with a sense of pride knowing we are in an era that will set a precedence for generations to come. I close out with the words of a fearless leader, Martin Luther King, Jr., that united nations, “An injustice anywhere, is a threat to justice everywhere.” “Real change comes from the power of unity” —President Damara Holness, Broward County Democratic Black Caucus

I will Quote Mfume, “Real change occurs when people who are not directly impacted by Pain are just as angry as those who are”— Guy A. Wheeler

“The March and program was a step in the right direction. The fight is not over and although we have come along way, we still have a long way to go. More young people need to understand how important voting is and how much of a voice you have. It’s important to not only vote in Presidential elections but also local elections. One way to start change is to know not only who to vote for, but also who not to vote for.”—Byler E. Henry

It is important that the community stand against such unlawful and ungodly abuse of a child. We need our children alive and physically healthy so that we can parade them across the graduation stage. Locking children up in jail unnecessarily, abusing them physically and dehumanizing them because of their race want be tolerated. We will organize, vocalize and make visual our disgust with police brutality. —Reverend Dr. Rosalind Osgood, Broward County School Board Member, District 5 Representative

The NAACP Fort Lauderdale Broward Branch stands firm in our commitment to get Justice For Lucca. The Black community will not sit silent while our children and families are brutalized and killed by law enforcement. Sheriff Tony and Broward State Attorney’s Michael Satz must be held accountable along with the two BSO deputies. —Marsha Ellison, President Fort Lauderdale Branch NAACP 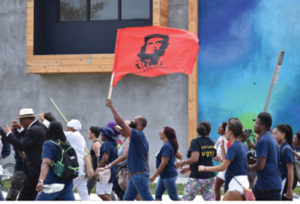 I stand on the side of God’s justice for all people. I am for Love, respect, a unified community. I am for seeing those held accountable for their actions. I cannot serve a Just God and accept unjust actions. Delucca Rolle is a child, he needs to begin to heal, his family needs to begin to heal and all of the children and adults that stand with him during his time of Crisis. –Pastor Eddy Moise, Mount Bethel AME Church, Pompano Beach, FL

I am proud the Black leaders in Broward County who came out and marched with the people and stood up said that they will not get away with this because if they are not held accountable we will be marching and rallying over another dead young Black male in the hands of our law-enforcement. I declare in my soul we will get justice for Delucca Rolle. —Attorney Ben Crump 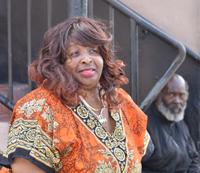 “Our strategic partnerships with progressive and powerful organizations like the National Coalition of 100 Black Women are vital to achieving our mission because they provide the amplification needed to reach more Black women with life-saving information and resources,” said Linda Goler Blount, President & CEO, The Black Women’s Health Imperative. […]