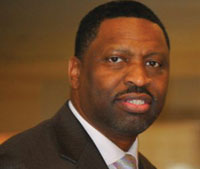 Johnson formerly served as vice chairman of the NAACP National Board of Directors as well as state president for the Mississippi State Conference NAACP.     (Photo credit (NAACP)

The NAACP has named Derrick Johnson, the vice chairman of their board of directors, the organization’s interim president.

On May 19, the NAACP board announced that the contract of Cornell William Brooks, the outgoing president, would not be renewed. Brooks’ contract ended on June 30. Brooks began his tenure as NAACP President in May of 2014.

“I am thrilled to announce that my friend and colleague Derrick Johnson has been appointed interim president and CEO. I could not think of a better, more battle-tested or more qualified individual to guide the NAACP through this transition period,” said Leon Russell, the chairman of the board of the NAACP.

“Derrick’s longtime service with the Association will allow him to take decisive action to deal with daily challenges. He will also serve as the primary spokesman for the NAACP. I have every confidence in Derrick and will support him in this new endeavor every step of the way.”

In a statement released on July 22, Johnson said that it is truly an honor and a privilege to be named the interim president and CEO of an organization that he’s served for decades.

“There’s a lot of work that needs to be done and we won’t waste any time getting to it. We are facing unprecedented threats to our democracy and we will not be sidelined while our rights are being eroded every day,” said Johnson. “We remain steadfast and immovable, and stand ready on the front lines of the fight for justice.”

The NAACP is about to embark on a nationwide listening tour to hear advice on what their focus should be moving forward.

NAACP leadership has acknowledged that younger civil rights organizations are getting more traction and attention in a world of social media and faster communications.

The first stop on the NAACP listening tour is Detroit on August 24. The second stop will be San Antonio, Texas in September. The organization’s leadership will “visit a total of seven major cities across the country over the next few months,” according to a press release about the tour.

Johnson will serve as interim president and CEO until a new president is named. Johnson formerly served as vice chairman of the NAACP National Board of Directors as well as state president for the Mississippi State Conference NAACP.

“By refusing to join with an overwhelming majority of his colleagues to protect women against gendered violence and fund vital programs that offer key support services to victims, DeSantis showed his true colors – and why he is unfit to serve as Florida’s next governor.” U.S. Rep. Frederica Wilson, (D-FL) […]

Michael A. Grant, who has gained a national reputation for his advocacy for Black economic empowerment for nearly a quarter of a century, has announced that he is resigning from the presidency of the National Bankers Association (NBA) effective Dec. 31, 2017 […]