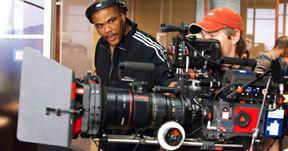 Need a Job? Tyler Perry is reportedly hiring at his studios in Atlanta

ATLANTA, GA — According to ET Inside, filmmaker Tyler Perry is expanding his operation at Tyler Perry Studios and is now hiring people looking to get into the entertainment business.

According to his official web site, “Tyler Perry Studios and

its divisions are seeking people with a genuine passion for film and television. With our ever-expanding company we are always looking for talented and creative people to assist in bringing imagination to reality. If you want a career that inspires, work that expands your creativity, gives you the chance to live your passion, grow and evolve then come join our team.”

Launched in the fall of 2008, Tyler Perry Studios is more than 200,000 square feet in size with a staff of more than 400 employees. Located on the former Delta Airlines campus of more than 30 acres, the studio consists of five sound stages, a post production facility, a pond, a back lot, a 400-seat theater, a private screening room, and designated areas for entertaining and hosting events.

Perry’s latest projects include a show for OWN entitled If Loving You Is Wrong, based on the film, which premiered in 2014. That year, he also garnered rave reviews for his role opposite Ben Affleck in David Fincher’s critically acclaimed box office hit, Gone Girl.

He will next be seen on the big screen in 2016 for Para-mount’s Teenage Mutant Ninja Turtles sequel as the villain “Baxter Stockman” and opposite Chloe Moretz in the independent film Brain on Fire, in addition to reprising the role of Madea in Boo! A Madea Halloween in October 2016.