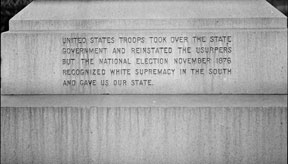 Against a backdrop of death threats and under the cover of night, officials in New Orleans have begun to dismantle Confederate monuments honoring racists of the Civil War and Jim Crow eras of United States history.

Workers removing the first of four monuments wore bulletproof vests, helmets and hid their faces. By 5:45 a.m. on April 24, the monument was gone. Three more monuments are set to disappear, but the city is not announcing publicly which statues will be next and what date the removals will take place.

“The removal of these statues sends a clear and unequivocal message to the people of New Orleans and the nation: New Orleans celebrates our diversity, inclusion and tolerance,” said New Orleans Mayor Mitch Landrieu in a statement on April 24.

At a press conference the morning after the first monument, the Battle of Liberty Place Memorial, was removed, the Mayor stated that the other monuments would be removed, “sooner rather than later.”

The two cases, Wells Fargo & Co. v. City of Miami and Bank of America Corp v. City of Miami, both involve allegations that the banks targeted communities of color within the City with predatory subprime loans during the run-up to the 2008 financial crisis and that the concentrated foreclosure activity that resulted diminished the City’s tax base and increased demand on public services such as code enforcement and police and fire services. The Court consolidated the two cases for briefing and argument.

“Relocating these Confederate monuments is not about taking something away from someone else. This is not about politics, blame or retaliation. This is not a naïve quest to solve all our problems at once,” the Mayor said. “This is about showing the whole world that we as a city and as a people are able to acknowledge, understand, reconcile—and most importantly—choose a better future. We can remember these divisive chapters in our history in a museum or other facility where they can be put in context—and that’s where these statues belong.”

In 1932, a plaque was added to put an even finer point on the racist motivations behind the monument. The plaque in part read that the battle was fought to “overthrow of carpetbag government, ousting the usurpers” and that “the national election of November 1876 recognized white supremacy in the South and gave us our state.”

According to The New York Times, “In 1993, the City Council voted to remove the obelisk, but instead the plaque was covered with a new one that read: ‘In honor of those Americans on both sides who died in the Battle of Liberty Place’ and called it ‘a conflict of the past that should teach us lessons for the future.’”

The reactions on social media to the monument’s removal were quite animated.

“It is more nuanced than that. One can support keeping the statues for accuracy…as a historical reminder of a shameful part of our history,” wrote one commentator on Twitter.

Much social media discussion dealt with the issue of whether negative parts of American history should be commemorated.

“When are we gonna put up some Hitler statues, ya know, to remind us of those dark times in History?” another Twitter user stated.

Others debated the role of poor White southerners who participated in the Civil War.

“It was the North who refused to recognize Blacks as people, resulting in the appalling 3/5 compromise. The South obv wanted,” wrote Erin Greer of Atlanta on Twitter.

A Twitter user, who identified himself as Clayton Barnes, responded: “And the South just wanted to own them, treat them terribly, and work them like mules.”

Dr. Bernice A. King brings more than five generations together
[…]

Blacks needs to join discussion on the economy

Blacks needs to join discussion on the economy
[…]