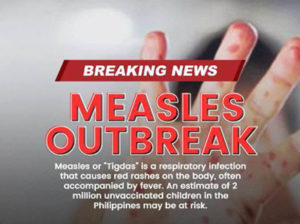 “This is the epicenter of a measles outbreak that is very, very troubling and must be dealt with immediately,” the mayor said at a news conference in Williamsburg.

New York City on Tuesday declared a public health emergency amid a measles outbreak in the ultra-Orthodox Jewish community in Brooklyn.

Mayor Bill de Blasio said that the city would require unvaccinated individuals living in certain areas in Williamsburg, Brooklyn, to receive the measles vaccine in response to one of the largest measles outbreaks in decades.

The mayor said that the city would issue violations and possibly fines for those who did not comply.

“This is the epicenter of a measles outbreak that is very, very troubling and must be dealt with immediately,” the mayor said at a news conference in Williamsburg.

The announcement comes a day after the city health department ordered yeshivas in Brooklyn to exclude from classes all students who aren’t vaccinated against measles or face violations and possible closure.

There have been 285 cases of the disease in Brooklyn and Queens since October, most of them involving members of the ultra-Orthodox Jewish community.

The health department said in a news release Monday that any school out of compliance “will immediately be issued a violation.”

Debates in the ultra-Orthodox Jewish community over vaccinations stem from Torah teachings that followers should not cause the body any damage since it is a gift from God.

Some see the small risks associated with vaccines and the risk of contracting diseases that have “been largely eliminated” as equal, and so subscribe to the Talmudic dictum that translates to “in some cases of doubt, better to sit and do nothing,” according to Rabbi Yehuda Shurpin, content editor for Chabad.org.