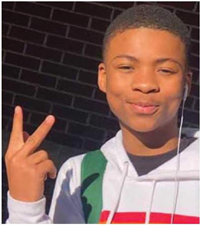 Nigel Shelby: A Tribute to the Alabama High School Student

Nigel Shelby (left) killed himself after he was subjected to anti-gay bullying in Huntsville, Alabama, his family says. Shelby was 15 years old. The state of Alabama provides no legal protections for LGBTQ+ high school students. If you or anybody you know is depressed or considering suicide, please call the National Suicide Prevention Lifeline on 1-800-273-8255 or The Trevor Project on 1-866-488-7386.

The circumstances surrounding Shelby’s tragic death were revealed in a Facebook post from Huntsville’s local LGBTQ+ pride organization, Rocket City Pride. Huntsville is known as Rocket City due to its association with U.S. space missions.

The group said, “We are heartbroken over the death of Nigel Shelby, a 15-year-old Freshman at Huntsville High School. Nigel took his life because he was bullied for being gay. There are no words that can be said to make sense of this devastating news.” That post was published on April 20 and included a link to a GoFundMe page that has been set up to help to pay for Shelby’s funeral. At the time of writing, the page has raised close to $15,000. The original goal of the crowdfunding page was $10,000. The blurb for the page simply reads, “Help Us Raise Money For Nigel Gone Too Soon.” A candlelight vigil was held for Shelby at University Park/Northridge on April 21.

Shelby’s mother thanked those who donated in a Facebook post. She wrote in part, “Everyone one for this amazing blessing and I want you to know I am humble and truly grateful. Even though I cannot thank all of you one by one just know I know who each and every one of you are and my heart feels a little less empty knowing you all are here.”

#NigelShelby took his life because he was bullied for being gay. Then the Madison County Deputy Sheriff Jeff Graves made homophobic comments on the post. I am disgusted by my hometown. #HuntsvilleAL

Madison County Sheriff’s Deputy Jeff Graves has been suspended from duty after he commented on a local TV station’s Facebook post regarding Shelby’s death. Graves wrote in the comment, “Liberty Guns Bible Trump BBQ That’s my kind of LGBTQ I’m seriously offended that there is such a thing as this movement. Society cannot and should except this behavior. I have a right to be offended and will always be offended by this fake movement which requires no special attention by persons persons with an altered ego and fake agenda.” Graves’ suspension was first reported by Al.com.

A Huntsville Pride Performer Said: ‘These Bullies Have to Be Held Accountable’

Among those contributing to the GoFundMe page was Rocket City Pride who raised more than $800 through brunch on April 21 and will hold bingo night in Shelby’s honor on April 23. One of the Rocket City Pride performers, Caila Malone, told Rocket City Now, “I remember being called terrible words even when I was in elementary school before I knew what they meant. These bullies have to be held accountable, and until our state legislation shows that they have to do that, they’re able to run a muck and do whatever they want.” Fellow performer, Zonnell Glamoure, added, “It really does get better. I mean, we stand here as full-grown adults proud of what we do.”

The principal of Huntsville High School Aaron King identified Shelby as a 9th-grade student at the school in a statement. King wrote, “We were saddened to learn this morning of the death of Nigel Shelby, one of our 9th-grade students. Our thoughts and prayers are with the family during this difficult time.” That statement included guidelines to parents to help them notice worrying behavior in children. According to the Center of Social Equity, 74 percent of LGBTQ+ youth say they did not feel safe at school.