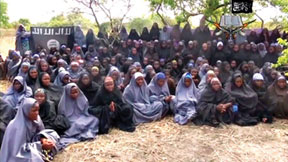 Like most people, I’d given up hope that the more than 200 high school girls who were kidnapped in northern Nigeria early this year by the terrorist group Boko Haram would ever see their parents again.

Then a couple of weeks ago, several major news outlets reported that the Nigerian government was negotiating with Boko Haram, whose attacks in the last five years have resulted in the deaths of perhaps 10,000 people. There was speculation that an end to the attacks – the kidnappings, suicide bombings, church bombings, massacres of hapless villagers, attacks on military installations and bank robberies – was imminent.

Of even bigger interest to the international community was a disclosure by sources close to the Nigerian government that the kidnapped girls would be coming home soon.

The kidnapping of the girls from their boarding school last April shocked the world, galvanizing much international attention from the media and celebrities as varied as Michelle Obama and Sylvester and created the ubiquitous hash tag “bring back our girls.” Around the world people marched, prayed and hoped.

So like many people, I was elated when the news broke a couple of weeks ago. But my elation was short-lived.  A few days ago, we learned that the Nigerian government had lied – again.

Not only were the girls not coming home, Abubakar Shekau, the leader of the nefarious group boasted in an online video, they’d been converted to Islam and married off to Muslim men in neighboring countries. And at no time had Boko Haram been negotiating with Nigerian officials, Shekau added.

It was an embarrassing rebuke to the Nigerian government, which has been repeatedly criticized for its mishandling of this crisis.

Equally embarrassing for the Nigerian government was the fact that it was caught in another lie – this time relating to Boko Haram leader Shekau.  Months earlier, leaders of the country’s underfunded, ill-equipped and overmatched military, which has been losing the war against Boko Harm, claimed they’d shot and killed Shekau in a raid. Their claim was aided by Shekau’s brief mysterious silence. When he resurfaced online, the government claimed the videos had been made before his death. Then they claimed the person in the video was a look alike. It was spin run amok.

Now, of course, it is widely believed that Shekau is alive and well.

It wasn’t the first time the government had cheerily announced progress in locating and rescuing the girls. A few months ago, one top military officer even claimed that his men knew exactly where in the Sambisa Forest, a former game reserve an area the size of West Virginia, the girls were located. The officer’s claim raised questions about the use of judgment and common sense (or lack thereof) in disclosing military intelligence.

A credibility gap has long existed between the Nigerian government and its people. In Nigeria, the saying goes, when the government says “good morning” people look out their windows to see if in fact the sun is up.

But Nigerians have learned throughout much of their 54-year independence to expect nothing from public officials.

The government stumbled badly at the beginning of the crisis by doing exactly what the people have come to expect – nothing. Life went on for members of the ruling class who are largely insulated from the may-hem unleashed by Boko Haram and whose children do not at-tend the same schools as the missing girls.

The day after the kidnapping Nigerian President Goodluck Jonathan, who faces re-election next February, danced at a political campaign rally. His wonderful wife denied there had been kidnappings. She alleged the story had been concocted by her husband’s enemies to make him look bad.

Only intense international attention and an unprecedented social media campaign orchestrated by some Nigerians and their allies abroad finally spurred the government to at least act like it gave a hoot.

In the meantime, Boko Haram continues to perpetrate unspeakable atrocities with impunity. The group, which seeks to create an Islamic caliphate in Nigeria, seized a large city at the end of October. Last week, the group renamed it “City of Islam.”  The group also controls a city that is a major trading center and is near the Cameroon border. The bombings, raids and finger pointing within the Nigerian establishment continue. And the girls’ whereabouts remain unknown. According to news reports, several of the girls’ parents have died from grief.

To some extent, the girls and their families are victims of the fickle nature of the media and celebrity attention as much as they are the victims of their government’s incompetence.

The international community, including the media, social media mavens and celebrities need to continue to do – and sustain – what they did so well last spring: keep this issue in the public eye and pressure the Nigerian government to take the mission of rescuing these girls much more seriously.

This way, the deaths of their relatives will not be in vain.

Bringing medical and spiritual communities together

Bringing medical and spiritual communities together
[…]

Two historic events that changed America occurred 50 years ago. While many will remember the 50th anniversary of the failed Apollo 1 space flight, an equally historic event that affected Black America remains largely forgotten.
[…]