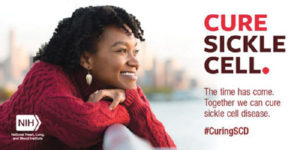 The Cure Sickle Cell Initiative seeks to develop cures for a far broader group of individuals with the disease, and it is initially focusing on gene therapies that modify the patient’s own hematopoietic stem cells (HSCs), which make red and other blood cells.

The National Institutes of Health (NIH) today announced the launch of a new initiative to help speed the development of a cure for sickle cell disease, a group of inherited blood disorders affecting at least 100,000 people in the United States and 20 million worldwide. The Cure Sickle Cell Initiative will take advantage of the latest genetic discoveries and technological advances to move the most promising genetic-based curative therapies safely into clinical trials within five to 10 years.

“Our scientific investments have brought us to a point where we have many tools available to correct or compensate for the defective gene that causes sickle cell disease. We are now ready to use these tools to speed up our quest for a cure,” said Gary H. Gibbons, M.D., director of NIH’s National Heart, Lung, and Blood Institute (NHLBI), which is leading the effort.

Sickle cell disease results from a single genetic mutation that causes a person’s red blood cells to form an abnormal, sickle shape. These sickled cells can clog the blood vessels and deprive cells of oxygen. In turn, this lack of oxygen wreaks havoc on the body, damaging organs, causing severe pain, and potentially leading to premature death.

Decades of basic research on sickle cell disease have laid the groundwork for novel genetic approaches to cures, such as the genetic editing of bone marrow cells, which have shown great promise in animal models and in some small scale human studies. In addition, the NHLBI Production Assistance for Cellular Therapies (PACT) program has been working with researchers to manufacture cellular therapeutic products, including genetically modified cells, that can be used safely in clinical trials with patients.

NIH spends approximately $100 million on sickle cell disease research each year. Through this initiative, NHLBI seeks to support the development of cell and genetic therapies resources, clinical trials, comparator analyses of different management strategies, data repositories and resources, and patient and advocate engagement activities related to curative therapies for this condition. Already in 2018, NHLBI committed an additional $7 million to jumpstart the initiative’s research and engagement infrastructure.

The initiative and other research partners will establish a national data warehouse of genetic therapies for sickle cell disease and conduct comparative analyses of therapeutic approaches to assess both clinical and cost effectiveness. They will also establish national networks to make it easier for patients and providers to learn and engage with the research, clinical trials, and other activities happening across the country.

“The engagement of patients will be a cornerstone of this effort,” said Benz. “Patients will work alongside researchers in developing and recruiting for clinical trials.”

The Cure Sickle Cell Initiative seeks to develop cures for a far broader group of individuals with the disease, and it is initially focusing on gene therapies that modify the patient’s own hematopoietic stem cells (HSCs), which make red and other blood cells. These modified HSCs can then be given back to the patient via a bone marrow transplant, making a cure available to more patients who lack a matched donor.

“This initiative is giving patients, families, and communities a reason for hope. I’m particularly pleased that we are able to make this announcement during Sickle Cell Awareness month, when we are shining a spotlight on the toll of this devastating disease,” said ADM Brett Giroir, M.D. Assistant Secretary for Health at the U.S. Department of Health and Human Services (HHS).

This patient-focused Initiative builds on the legacy of NHLBI-supported research that has contributed to improving clinical care for patients who have sickle cell disease. It also complements the Institute’s broader sickle cell disease research investment, which includes basic, clinical, translational, and implementation science research.

It’s important that you talk to your doctor, openly and regularly, about sickle cell disease, and learn how to best manage your condition and reduce the complications […]

Thirty- fifth annual appreciation banquet: One Cause, One Community

Dr. Kevin Williams says that sickle cell disease is a serious, lifelong condition that a person has from birth, you don’t “lose” or “out-grow” it over time. […]