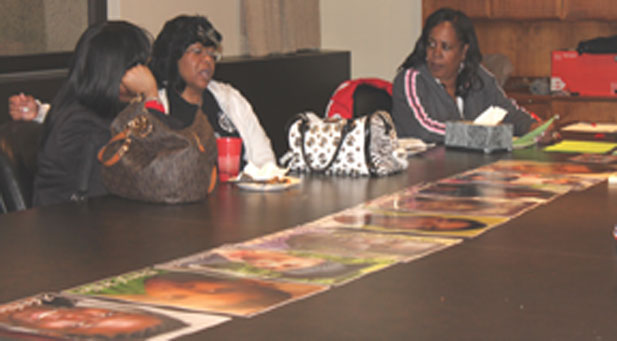 No greater pain than burying your murdered child

By Zenobia Jeffries, Special to the NNPA

Three Detroit youths were shot in one incident last month. One died. Two were critically wounded. Their ages range from late teens to early 20s. According to the Detroit Police Department (DPD): “Three Black males were sitting in a red Pontiac G6 when an unknown Black male driving an unknown black vehicle pulled up, got out of the vehicle, walked to their vehicle and started firing shots.”

No further information was given. The suspect had not been apprehended at press time.

“No parent should have to bury their child. It’s not the natural order of things,” says Andrea Clark, founder of local organization Mother of Murdered Children.

Yet increasingly, thousands of mothers and fathers across the country have joined the growing number of parents who suffer from losing a child to gun and other physical violence. Many of the victims under 25 years of age have been killed by members of their own communities, others by law enforcement officers sworn to protect and serve them.

Detroit topped the list of most dangerous cities for the second year in a row with a violent crime rate of 2,072 per 100,000 and murder rate of 45 per 100,000. And, although overall violent crime numbers are down in the city emerging from bankruptcy, homicides are up 14 percent.

There was nearly a homicide a day in March — more than 20, according to the Detroit Police Commission. There have been 113 homicides in the city so far this year.

More than 80 percent of Detroit’s 700,000 residents are African American. It is joined by cities such as Chicago, Philadelphia, Ferguson, Mo., Balti-more, Md. that have predominately or large numbers of Black citizens, and high crime rates.

According to the Washington Post, U.S. police officers have shot and killed 385 people in the past five months, a rate of more than two people a day.

With the killing of Eric Garner by a New York police officer who choked Garner to death, followed by the shooting-death of 18-year-old Michael Brown, countless other killings of Black males and protests of injustice over their deaths have head-lined media broadcasts and publications — as well as flooded social media sites, for nearly a year.

The mission of MOMC is to prevent violence through education and proactive intervention with children, young adults, families and community organizations. Frustrated with the lack of support and resources in their communities, MOMC joined similar organizations nationwide in the nation’s capital recently to lobby for policy to end gun violence (and homicides) in the U.S.

The other organizations included Mothers In Charge Inc., WAMD —Women Across America Making a Difference; PEACE — Parents Encouraging Accountability and Closure for Everyone; and Mothers Against Gun Violence), along with residents from their communities will gather at the Lincoln Memorial’s Reflecting Pool for The Standing for Peace and Justice Rally calling on lawmakers to declare gun violence/homicide …  a public health crisis.

Homicide is the leading cause of death among young African American males between 14 and 25 years of age. Such in-formation is rarely included in the national debate about the epidemic of gun violence in America, says Clark.

Gun violence has claimed the lives of more than 30,000 men, women and children in recent years, according to the Centers for Disease Control. Killers, the CDC reports, used guns to murder 11,000 people in 2010 in the U.S., the latest year for which statistics are available. Twenty thousand others used guns to commit suicides that year and 73,000 were rushed to hospital emergency rooms for gunshot wounds

Clark’s son, Darnell, was killed in April 2011. He was taking pictures for a friend’s birthday at a nightclub in down-town Detroit when a fight broke out. Clark says the security for the nightclub had everyone exit the building. While attempting to drive away in his vehicle, shots rang out and Darnell was struck. Clark’s grief led her to create the organization, Mot-hers of Murdered Children, only months later.

“I was just reaching for anything, a lifeline, anything,” she says, explaining the challenges she endured in getting information from the DPD regarding her son’s case. With questions looming, she spoke to a friend about the idea of a group to help mothers who experience her same suffering. MOMC was a vision from God she says.

“Once I started talking to all these different mothers, I just put my (pain) on the back burner. I think I was living through their pain and trying to fix them. And forgot… ” her voice broke, and her eyes watered.

Although Andrea has told the story of her son’s death on multiple occasions she began to cry as she reminisced about the good times, and the irony.

Darnell was an aspiring photographer, and he was a dad — a great dad. “My son didn’t even like going to clubs,” she said.

Mary Groat, of Wyandotte, is one of the original members of MOMC. Her son Scott was killed December 2011 while leaving a party where he’d just sung backup in a band. No one’s been charged in his death.

A musician and tattoo artist who was planning to open his own shop, Scott was also a youth speaker for Beacon Baptist Church.

Andrea and Mary share similar fates with Rose Ford whose son, Darrlye Miller, was killed for his Cartier glasses, also at a nightclub in downtown Detroit; Constance Williams, whose son Justin was randomly shot and killed on the Fourth of July at a park; Brenda Hill, whose son Brandan Rogers was killed along with his friend Melynda Goodwin while walking her to her car; and Gail Dunson, whose son Brian was killed in his driveway.

“Senseless gun violence,” is how Williams describes the cause of her son’s death.

It was July 2013. A fight broke out at a neighborhood fireworks display on the west side of the city. Justin, 24, had taken the day off from work to take his younger sister, who was 18, to see the fireworks held annually in Outer Drive/Schafer area.

“What I’ve heard is that earlier in the evening a fight broke out; my son wasn’t involved,” Williams said.

She described her son as sheltered.

“He grew up in Catholic school (although he graduated from a Detroit public school) because I was afraid of gangs,” she pauses. “To know Justin is to love him.”

Her son’s death came as a shock to anyone who knew him, Williams says.

“He was the type of person who, if trouble was breaking out he was going the other way. He wasn’t about the business of trouble. He was about going to school, going to work, making money the legal way,” she said.

And helping others. Though it may not have been his ideal job, says his mother, Justin was a mental health assistant at the Samaritan Center.

Justin’s case is still open, and Constance Williams, like many other mothers, has found herself without closure.

“The police did the investigation…. One person came into the funeral home and came up to me and asked, ‘Are you his mother? …  I saw everything” (they) wanted to go into detail, but I wasn’t the strong person I am now, told (them) to give it to my best friend, who was next to me.

“I provided that information to the detective. He said he visited, but because (the person) was drinking and smoking weed (they) couldn’t be a credible witness.”

“It’s been quite a task dealing with the police department. I try to be sympathetic but not to the point where they forget about my son’s case,” she said. “I know Justin’s case is not the only case… but (he) could have followed up. I’m a grieving mom, but I’m not expecting anybody to do anything special for me. The same level I’m expecting for my son, anybody should get. I know they have a lot, but I don’t want his file to get to the bottom of the file.”

Scott and Justin’s cases are among hundreds of the DPD’s cold case files extending back more than 30 years. The unit, which was disbanded in 2013, was recently reinstated, according to DPD Asst. Chief Steve Dolunt.

“We’ve lost more lives to homicides in Detroit than in the last 30 years of war,” Dolunt said in an interview. “Isn’t that sad?”

“Every student has a right to an educational experience where they feel safe, engaged and supported. However, the fact remains that far too many students, especially Black lesbian, gay, bisexual, transgender, queer and same gender loving (LGBTQ/SGL) students, find college campuses and K-12 schools to be hostile and unsafe spaces, which makes it challenging to learn and develop the skills, experiences and credentials needed to succeed in the global 21st century labor market. Black transgender and gender nonconforming people face unique and sometimes disproportionate challenges, including hate crimes that make it harder for them to succeed in school and in life.  […]