From the movements of the 1960s to the evolution of progressive culture today, college-aged individuals have been one of the main groups energizing the quest for change. 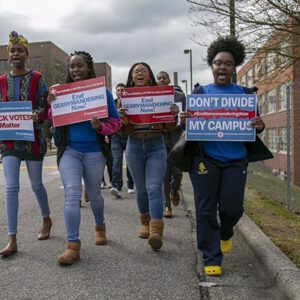 The political power of students at HBCUs has been a catalyst of change for decades in this country.

From the movements of the 1960s to the evolution of progressive culture today, college-aged individuals have been one of the main groups energizing the quest for change.

This week in Selma, Alabama, that story continues with North Carolina A&T State student Aigné Taylor. The senior, who is double majoring in political science and sociology, spent her spring break being a part of the 57th anniversary of one of the most pivotal events in American history.

Bloody Sunday along with the 54 mile March from Selma to Montgomery, the Capitol of Alabama, helped raise awareness about the struggles of voting for Black people in this country. It led to Congress passing the Voting Rights Act in 1965 that helped alleviate legal barriers for Black people in voting.

“For me to participate in such a historic event is groundbreaking. I grew up seeing MLK Jr. in textbooks and seeing all the women who have been on the forefront of voting rights and that movement,” said Taylor. “Being able to attend an anniversary of that event is so surreal for me.”

Taylor was able to get down to Selma through collaboration with Black Voters Matter Fund, an organization whose goal is to increase power in our communities through voting. Black Voters Matter Fund has a partnership with North Carolina A&T to do big voter registration pushes and other important advocacy efforts. Students like Taylor have been doing similar work on campus to educate and inspire Black peers to gain voting power. 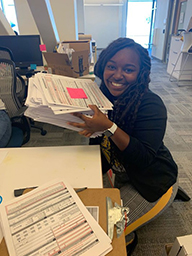 “I’m very passionate about these events,” said Taylor. “At my institution, I do a lot of work around advocating for A&T to have a polling site and advocating to make sure A&T isn’t combated with voter suppression and things of that nature. And really educating my community on what it means to be an active Aggie in society and being active when it comes to voting.”

The native of Havelock, North Carolina, and aspiring attorney isn’t sure what area she wants to work in yet but she is inspired to be an advocate that works to help educate people on their voting power and their history.

Taylor understands just how powerful the mind of the young Black voter can be. The young people of today’s generation have a major influence to create change in the similar ways that those young people who marched in Selma in 1965 did.

“The power that we as youth have when we come together is beautiful… We can seriously impact an election,” said Taylor. “We see that closely at North Carolina A&T, with us previously being gerrymandered, they literally wanted to split us in half because we are such a large Black voting block in North Carolina.

Now, the goal is to get as many people as she can to realize their power and not let outside forces dictate their strength.

“They really want to suppress our power,” said Taylor. “So it’s really important to grasp that and understand that you do have that power and utilize that.”