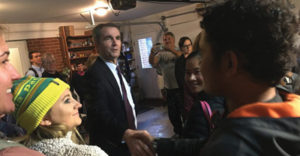 NAACP Stands by Call for Virginia Governor to Resign

BALTIMORE –“We are deeply disappointed in Gov. Ralph Northam ‘s decision to not resign today. His failure to take accountability for his actions is sickening. He says he used shoe polish on his face to mimic Michael Jackson, yet denies he ever used Black face. This is unacceptable for any leader. He contradicts his earlier decision to admit responsibility to now say he had nothing to do with the photo. Implicit bias is bias, and it’s clear that someone who cannot distinguish from using shoe polish on his face to imitate a Black person from Black face, clearly suffers from this or is delusional. This image is example of the historical effects of institutional racism and the lack of awareness of the discrimination against of Black people. Racism of any kind cannot be excused nor overlooked. We stand by our call for his resignation. He will now have to answer to his constituents in Virginia who will find it difficult to make peace with his choice. “                     —Derrick Johnson, NAACP President and CEO