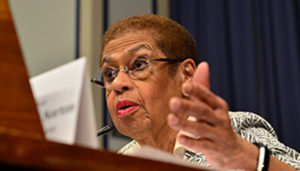 Longtime D.C. delegate Rep. Eleanor Holmes Norton said that she would work with the NNPA and the NAHP to pressure Congress to demand greater federal adverting spending with minority-owned publishers. This photo was taken during a congressional panel discussion on judicial diversity. (Freddie Allen/AMG/NNPA)

In a blistering response to a new report by the Government Accountability Office (GAO) that revealed federal agencies spend very little advertising dollars with minority-owned businesses, D.C. Democratic Congresswoman Eleanor Holmes Norton said that she would work with minority publishers to press her colleagues in Congress “to demand greater spending on minority-owned outlets…to reach minority audiences that most traditional outlets do not.”

Holmes Norton said that she requested the GAO report to learn more about the disparities in federal advertising contracts.

The 41-page report issued, last week, revealed that over the past five fiscal years, federal government agencies spent $5 billion in advertising, but just $327 million of that went to minority-owned businesses.

Dr. Benjamin F. Chavis, Jr., the president and CEO of the National Newspaper Publishers Association President (NNPA), thanked Holmes Norton for her support. The NNPA is a trade group that represents more than 200 Black-owned media companies and newspapers that reach 20 million readers, combined, in print and online, every week.

More than two years ago, Holmes Norton joined members of the NNPA and the National Association of Hispanic Publications (NAHP) for a press conference on Capitol Hill, to demand the report, which was issued last week.

Dorothy Leavell, the chairman of the NNPA and publisher of the Crusader newspapers in Chicago and Gary, Ind., called the results of the report shameful. Leavell added that she would call for legislation to address the disparities; she also said that she plans on requesting meetings with members of Congress to further explore the matter.

In an interview, last week, Dr. Chavis called on Congressional Black Caucus (CBC) Chairman Rep. Cedric Richmond (D-La.), and the Congressional Hispanic Caucus “to forcefully raise their voices of discontent and reaffirmation of the demands for equity, for justice, for fairness and end to this kind of systemic refusal to treat African American-owned and Latino-owned businesses along with others in a just, fair and equitable manner.”

Dr. Chavis added that the report exposed the consequences of systemic racial discrimination in both Republican and Democratic administrations when it comes to federal advertising spending.

Dr. Chavis continued: “It’s time for all of us to respond and to act. There should be legislation introduced in Congress immediately to rectify this gross systemic inequity.”

Violence against women and children is wrong

Violence against women and children is wrong
[…]

in answer to the question when cultures clash in the classroom, who suffers, we all do! Poorly educated students make for a society that alienates its young, one that is unable to retain skilled and experienced teachers, and a country frustrated with unemployment, under-employment, and an ever-growing culture of violence, fear, and intolerance. Court systems and privatized prisons, along with mortuaries, result when the classrooms act as prep schools for these expensive alternatives. […]

Things you should know about Lyme disease

Things you should know about Lyme disease