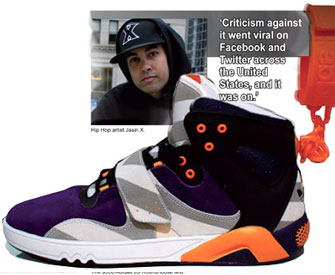 ‘Criticism against it went viral on Facebook and Twitter across the United States, and it was on.’

NEW YORK, N.Y. (FinalCall.com) — More than a week after the German shoe company Adidas unveiled its plans on Facebook to market a $350.00 sneaker with a chain that could be wrapped around the ankle, the “JS Roundhouse Mid,” the insult to Black folk was still felt.

Black reaction in the U.S. was quick and angry: The shoe was a symbol of slavery and also called a tool of the prison industrial complex, where some 50 percent of 2.2 million Americans locked up are non-White.

California-based shoe designer Jeremy Scott declared the shoe had nothing to do with slavery. It was modeled after a doll that sported handcuffs, he said.

Mr. Scott called for people to move on and stop being sensitive. The New York Observer was among outlets that called the uproar a media-manufac-tured controversy.

Among Black athletes with endorsement deals for Adidas footwear are Robert Griffin III, the 2011 Heisman Trophy winner, and the NBA’s Orlando Magic center Dwight Howard, according to Forbes magazine.
Jasiri X said Adidas made the decision to cancel marketing the shoe in the early evening of June 18 “as criticism against it went viral on Facebook and Twitter across the United States, and it was on.”

Without the controversy the shoe appeared destined to stores and shelves.

The Rev. Jesse Jackson also denounced the sneakers as looking like “slave shoes.”

“Rev. Jesse Jackson speaking up was kind of the straw that broke the camel’s back,” Dr. Boyce Watkins, a professor at Syracuse University, political analyst, and founder of the Your Black World Coalition, told The Final Call.

Adidas should not be let off the hook just because the company promised not to market the shoe, he argued.

When marketing a product where Blacks are asked to ignore one of the worst periods in history, an explanation is owed, he said.

“What it shows is that there was no Black person in the room when the decision was made,” Dr. Watkins added.

Responding to the shoe de-signer’s early comments about hypersensitivity, Dr. Watkins said, “Insensitive people are al-ways going to say that you are being too sensitive about something.”

Dr. Watkins added that Blacks need to move away from feeling “White people have to validate our indignation.” That’s like a basketball team asking the other team if it is alright if they score a point, he said.

“We need to ask them if there had been a Nazi Swastika on the shoe, would there be claims of being too sensitive when the Jewish community reacted,” said Dr. Frances Cress Welsing, a Washington-based psychiatrist and respected authority on White Supremacy and its manifestations.

Dr. Welsing also wants to know if there were any Blacks in the room at Adidas.

“Let us make no mistake, the Black man has to be emasculated and that is what that sneaker is all about,” she said. “Maybe your headline should be ‘Are Black Men Enslaved in a System of Racism and White Supremacy?’ ” said the author of “The Isis Papers” and creator of the “Cress Theory of Color Confrontation.”

The story also played differently in White-owned and Black-owned media. A story in the Chicago-Sun-Times argued the shoe design appeared to glorify so-called “thug wear.” “But is it racist?” the writer asked. According to the New York Times, there were 38,000 likes along with 4,300-plus comments on the Adidas Facebook page, with comments like “shoes are cool,” “people should not get offended” and slavery “was in the past.”

Comments on Kulture Kritic, a socio-political website, included the comment, “We African Americans would be camping out for days waiting for the doors to open to purchase these shoes, no matter the cost. In fact, we would probably even kill for them. We have lost all sense of pride and respect for ourselves.”

The Los Angeles Times appeared to feel it was necessary to show some Blacks didn’t feel the sneaker was offensive. It cited a Twitter message reading: “There was absolutely nothing offensive about the shoes and this is coming from an African American. Jeremy Scott is awesome! They’re shoes people get over it.”

The majority Black reaction, however, condemned the product and blasted the shoe company.
“The media has a habit of reaching out to the most dysfunctional within our community,” said Dr. Watkins.

Dr. Welsing had strong words concerning the mental state of Black people. “The game that is on the table is racism and White supremacy, and we are looking stupid because we don’t understand the game,” she said.

“This is a genocidal war that is taking place, but we don’t see who is causing it; that is why Black people greet each other by saying ‘what’s happening’—without realizing that White people are trying to kill everybody on the planet who isn’t White,” Dr. Welsing said.

Dr. Welsing has argued essentially that Whites are a minority on the planet and move instinctively to protect their existence by attacking and oppressing Blacks who have the potential to remove Caucasians from the planet through reproduction.
That is what the “killing of Trayvon Martin” represents and also the Stand Your Ground self-defense law,” she said.

Professor Griff, a member of the rap group Public Enemy, said what makes the sneaker debacle so ridiculous is legendary hip hop group Run DMC wearing the “shell-toe” Adidas sneaker in the late 1980s “became the gateway to Black people’s money, opening the door to the multi-national corporations—so they would be able to find their way into our homes.”

Hip-hop mogul Russell Simmons said he doubts Adidas had any malicious intent, and believes they just failed to consider how it would be viewed. The public outcry changed things, he said.

“They didn’t know any better,” Mr. Simmons told The Final Call. “They were thinking it’s a cool name, some Black kids may like it, it may cross over to White kids, and everybody may buy it.”
If he would have been asked by the company for consultation on the matter, “I would have told them don’t do it,” said Mr. Simmons. “They figured it out though, when the community spoke up.”

Paradise Gray, co-founder of the Pittsburgh-based One City, One People, One Hood, was not immediately on board with Run DMC’s use of the sneaker; nor their popular song “My Adidas.” The song was released in 1986 and reached No. 5 for Black singles and was a leader in dance music sales. It was still popular 14 years later, got news coverage of its 25th anniversary and has been used as part of video game sound tracks.
According to the Target Market News report, “The Buying Power of Black Americans,” in 2010 Blacks spent $995 million on sports and recreation equipment and $29.3 billion on apparel products and services. Clothing is one of the top five expenditures in Black households, according to Target Market News.

Insults because product design and marketing aren’t new to Blacks.

According to AdSavvy.com, among the products and publicity stunts that have depicted Blacks negatively are EMOBILE’s Roast Commercial depicting President Obama as a monkey; Coloreria Italiana, an Italian detergent commercial showed a White woman shoving her husband into a washing machine, then out pops a muscular Black man. “Once you go Black, you never go back,” the ad declares. In 2006, a Sony ad featured an aggressive White woman, clawing, clutching and denigrating a so-called subordinate Black woman and an Intel ad in 2007 has a White manager, looking like a master, standing over bowing Black athletes who bow in symmetry before him, said the site. Kool-Aid has a stereotypical hip hop basketball court vignette, for a drink often referred to as “ghetto juice,” and then there are “Obama Waffles” and “Obama Fried Chicken,” again playing to Black stereotypes, it said.

And, since 1946, there has been “Uncle Ben’s Rice,” whose name seems drawn from the White practice of calling elderly Blacks “uncle” and “aunt” during segregation. The most well known may be “Aunt Jemima Pancakes,” who featured a handkerchief-headed fat Black mammy figure extolling the majesty of pancakes.

The Final Call has attempted to get designer Scott and Adidas to comment on the shackle sneaker fiasco. No response had come as of press time.

“I think people must continue to stand up and challenge this, it is very important that we care about our history, they (Adidas) make a mockery of our history,” said Nasser Muhammad, a 26-year-old school teacher and basketball coach at Washington, D.C.’s Maya Angelou Charter School.

Adidas No Longer Plans to Release the Shackled Sneaker

After massive public back-lash, Adidas has announced that it no longer has plans to release the shackled sneaker that it was planning to put on the market in August. […]