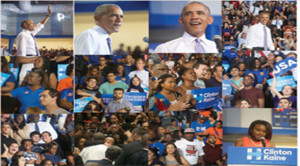 President Barack Obama is a rock star, though maybe not in the traditional sense of the word.

Yes, he had fans screaming his name.

Yes, he did use a microphone.

Yes, he had rapper/producer/business mogul DJ Khaled as an opening act.

And yes, he had Miami traffic backed up for hours.

Despite all that, when he spoke to the capacity crowd of 2,800 people at Florida Memorial University in Miami Gardens Thursday, all eyes and ears in the gym were still hooked on his every single word.

President Obama was in Miami-Dade County in order to rally voter support and campaign on behalf of Democratic presidential nominee, and former Secretary of State, Hillary Clinton and during his near 40 minutes on the stage, he wanted to encourage people to vote for “the person who has spent her entire life making the country better.”

“She works hard, she gets the job done, and she actually knows what she’s talking about,” Pres. Obama said. “She’s doing the work, and that’s what you should want from a President of the United States.”

President Obama opened by mentioning some of the legacies he’d be leaving behind once he leaves the White House: making sure nothing in the Oval Office is broken (“Michelle [First Lady Michelle Obama] and I only get an 8 year lease …we want our security deposit back”), creating 15 million jobs, fighting out of a recession, bringing U.S. troops back home, getting justice for Osama Bin Laden’s actions and doubling production of clean energy and ensured that Sec. Clinton would continue to expand on the progress.

Not only was President Obama here to support Hillary Clinton, he also wanted to throw his support towards Rep. Patrick Murphy, D-FL, who is running for a seat in the Senate against incumbent Marco Rubio in the November primaries. President Obama said Murphy, who was in attendance at the rally, “actually shows up, has a track record of fighting for issues such as immigration, didn’t defund Planned Parenthood, and actually believes in science, unlike his opponent.”

Rubio wasn’t the only Republican that garnered boos from the crowd. People couldn’t help but booing at almost every mention of Republican nominee Donald Trump’s name, to which the President showcased his trademark wit: “Don’t boo,” Pres. Obama said. “Vote. He can’t hear your boos, but he can hear you at the ballot box.”

Pres. Obama continued through different points and spoke at length about how Trump is “not part of the solution, rather part of the problem.”

“There are a lot of politicians that…just look the other way,” Obama said. “They figure ‘if we can stir folks up and have them think that Barack or Hillary or others are doing all these terrible things we’re saying they’re doing, that’s gonna help us get votes. So we’ll just oppose anything they’re doing.’ And so they stood by and did nothing.”

He continued: “And Trump didn’t start that. All he did was slap his name on it and take credit for it like he always does.”

Pres. Obama wanted to make Trump’s flaws well known to the crowd, whether it’s about the tapes of him allegedly admitting sexual assault, leading to his own party’s reluctance to endorse him, (“I’m more confused by Republicans that still support him,” Pres. Obama said) his “bromance” with Russian President Vladimir Putin, or Trump’s place in history as the first presidential nominee to run for the nomination and refuse to accept the results (though Trump did admit he’d only accept the results if he wins).

And for his final act, President Obama closed by asking the question: “What do you have to lose by not voting?”

He answered with one word: “Everything.”

And seemingly in the blink of an eye, the rally concluded.  His entire speech was a concert with no pauses in action, excitement from start to end, and he left the stage to a standing ovation and the crowd roaring for more.

Seems like Secretary Clinton does have a rock star in her corner after all, and he’s pulling out all the stops. And she’s hoping it pays off come Tuesday, Nov. 8.