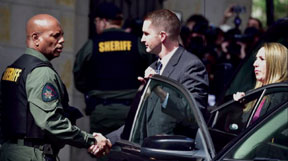 Officer in Freddie Gray death, Edward Nero, not guilty on all counts

One of the six officers charged in the arrest and death of Freddie Gray was found not guilty on all counts in Baltimore on recently.

On Monday, chants of: “No justice, no peace. Jail to the police,” could be heard outside of the courthouse after the verdict was read. Protestors yelled those chants at Nero as well as authorities escorted him past the gathering.

Nero, 30, was one of two officers who initially made eye contact with Gray before his arrest. Gray, 25, died on April 19, 2015, a week after his neck was broken while he was transported in a police van — shack-led and handcuffed, but without a seat belt.

Baltimore Mayor Stephanie Rawlings-Blake on Monday said city officials were ready to respond if any disturbances broke out in the city.

“This is our American system of justice and police officers must be afforded the same justice system as every other citizen in this city, state and country,” Rawlings-Blake said. She added that Nero would face an administrative review by the Baltimore Police Department.

One year after Freddie Gray’s death, nothing has changed

Grays’s death set off more than a week of protests in Baltimore, which eventually led to unrest and the implementation of a six-day curfew across the city. The events also refocused national attention on issues of tensions between law enforcement and the minority communities they serve.

The White House waded into the fray with President Barack Obama commenting both on the unrest and broader racial tensions.

Prosecutors fought for Nero and two of the other officers be tried together, but their request was denied. Nero opted for a bench trial as opposed to a trial by jury.

While prosecutors argued that Nero arrested Gray without probable cause and was negligent when he didn’t buckle Gray into the van, a defense attorney said Nero didn’t arrest Gray and it was the responsibility of the driver to buckle Gray in.

The defense also argued that the officers who responded that day acted responsibly. Gray was charged after his arrest with possession of a switchblade.

Prosecutors have sought to compel his testimony in the trials of the other officers, by giving him a form of legal immunity, but Porter argued that would violate his Fifth Amendment right against self-incrimination.

On Friday, the Maryland Court of Appeals ruled that Porter had to testify.

“We hold that the State’s compelling Officer Porter to testify in the trials of his fellow officers, under the grant of use and derivative use immunity, does not violate Officer Porter’s privilege against compelled self-incrimination under the Fifth Amendment to the United States Constitution and Article 22 of the Maryland Declaration of Rights,” the court wrote.