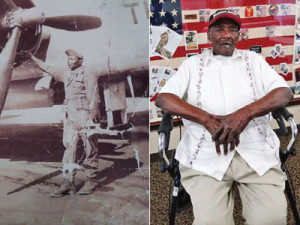 Preston Jowers is the oldest surviving member of the Tuskegee Airmen.

But the World War II veteran, who now lives in the American House assisted living center in Bloomfield, Michigan, says the racial discrimination his fellow African American servicemen faced decades ago is still a major problem in the U.S. Today — and it “breaks his heart.”

“I just have to ask ‘Why?’ ” Jowers, who was an engineer during his time as an airman, tells PEOPLE. “We proved all those years ago that black men and women weren’t dummies, we showed the nation that we are capable of doing a job and doing it well, but racism — it just hasn’t stopped.

“I want young people to realize that you too can make it and make a difference, just like we did in the war.”

Jowers was 27 when he got drafTed during WWII. He went through basic training in Denver, Colorado, before heading to a mechanic school in Lincoln, Nebraska, to learn about wartime planes.

“I didn’t know a thing about planes!” says Jowers, who grew up in Douglas, Georgia. “But when I worked for a meat market as a kid, I learned a rough lesson about giving 110 percent to anything in life.”

That tough lesson came from his employer in Douglas, who spanked Jowers when he failed to make a meat delivery on time.

“After he whooped me, he said, ‘When you work for some-one you do the best you can do and nobody can ask more of you,’ ” explains Jowers. “I took that to heart, there was never a job I couldn’t do — even work on planes in the war.” 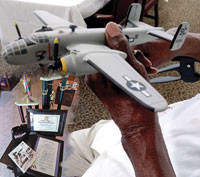 Jowers’ main duties as a Tuskegee Airman were to ensure that all plane engines and instruments were in good condition. He mainly worked as a mechanic on B25 bomber planes and P40 fighter jets.

“I cherished every minute of

it and it was an experience that I will always be proud to be a part of,” says Jowers.

But his time as an airman was rife with racism.

“We couldn’t eat together, we couldn’t fight the war with white men,” he recalls. “The racism didn’t pertain to me as much, because I was a mechanic, but men with the same rank who were different races couldn’t even talk to each other back in those days.

“It was some of the worst segregation I’d ever seen.”

Jowers says he experienced “inense prejudice” growing up in Georgia.

“But officers during the war thought the Black man’s brain was so different that they couldn’t fly a plane,” says Jowers. “So what we did was stop and put God on our side and try to love each other — and that’s what we need to do now as a country.”

After almost four years of service, Jowers received an   honorary discharge and began

looking for a job as a plane mechanic.

“It was my dream job, so I went to the city airport [in Detroit] to try and get a job, but they wouldn’t even let me in the door because of the color of my skin,” he says. “It was hard because I’d just served my country, but here I was being turned away from a job I was qualified for.”

Instead, Jowers went into the trucking business. He got married in 1943 and he and his

His dreams of becoming a plane mechanic eventually faded — but every time he sees a plane he “still gets giddy.”

“I’m reminds me of how I served my country,” says Jowers. “And even though I never worked on planes again, because of the color of my skin, I take pride in the fact that I did the best I could on my work during the war.

“Just like I was taught back in Georgia, all those years ago.”

This article was originally published on PEOPLE.com