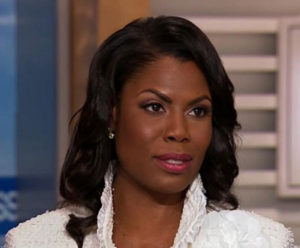 “Woe unto them that call evil good, and good evil; that put darkness for light, and light for darkness; that put bitter for sweet, and sweet for bitter!  (Isaiah 5:20)

Omarosa was one of those Black folks who licked President Trump’s boots no matter what they had walked in. She denied he was a racist or misogynist or sexually assaulted women. She made it her business to attend national Black gatherings and defend President Trump as arrogantly as she could. She seemed to believe that President Trump was God and she was his high priestess. She treated her own people with the same disdain and contempt as the President does.

She was not alone in being Black and a sycophant and defender of a man who believes Nazis are good people. There are a coterie of Black Americans who are as shameless as they are will fully uninformed in their defense of Trump. Paris Dennard, Jim Brown, Kanye West, Rev. Darrrell Scott are the most well known of these people.

Now she wants us to believe she just discovered that the God in her life is everything negative people have been saying he is. He is according to Omarosa a racist misogynist, incapable of being fair or compassionate, and unqualified to hold the office of President. Talk about an awakening.

And I’m still trying to understand

who she is talking about when she speaks of “my people.” I know it cannot be Black people she is speaking of because she has never shown any affinity for us.  Perhaps she’s speaking of the alt right or the Blacks for Trump segment of people.

As for her new book and the tapes she made and how Kelly fired her, what did she expect? What did the White House expect? The question al-ways was why did this woman who was not a domestic policy expert, was not a counselor in internatinal affairs, nor had economics expertise, have unfettered access to the President? Why was she allowed to come in and out of the Oval Office when she pleased? Why was he paying her almost $200,000 a year for nothing?  Why?

Trump for his part is now calling Oarosa a “low life,” questioned her intelligence and her ability to be able to work with people, and said “nobody liked her.” Either the two of them are the biggest liars we have ever heard or neither of them  has any sincerity about anything. Especially friendship.

I have some advice for President Trump.  Swallow hard, let Omarosa sell her book and spare yourself and your family  what happens if you push Omarosa to tell all she knows. She knows way too much and can do way too much damage for him to go tit for tat with her. Is she lying about what she says of Trump?  Some maybe but not a lot I’d bet.

Finally there’s this: Omarosa represents what happens when one decides that qualities like honesty, loyalty, compassion, and an honest work ethic are sacrificed for greed and pride.  Having an allegiance that is for sale is one more reason she has become who she is. Donald Trump too.  They deserve each other.

President Donald Trump and the Republicans are laughing at this spectacle and the polls say the major Democrats would win the election if it was held today. The Quinnipiac University has released the polls this week and the President is calling this information fake news. […]

It’s very evident that living under the Trump administration poses a challenge for Black defendants. There is a trend among judges that are nominated by Republican presidents that result in longer and harsher sentences. Based on a study from Harvard, there is a huge gap between Democrat and Republican-appointed judges and how they impose sentences on Black offenders. […]