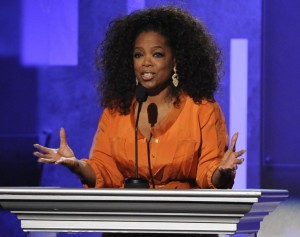 Beloved talk show maven Oprah Winfrey (pictured) could be headed to your town this September as she prepares to embark on an eight-city ”The Life You Want” tour, according to The Hollywood Reporter.

The weekend conferences will offer a two-day self-help experience spearheaded by the mogul herself, along with a host of cherry-picked, life-affirming experts, such as the author of  ”Eat Pray Love,”Elizabeth Gilbert; the man whom Time Magazine deemed as one of the “100 Most Influential People of the World,” pastor Rob Bell; OWN star and spiritual teacher, author, and television personality Iyanla Vanzant; and in a few cities guru Deepak Choprak.

Oprah’s tour is expected to make stops in Atlanta; Auburn Hills, Mich.; Houston; Miami; Newark, N.J.; Seattle; San Jose, Calif.; and Washington. Ticket prices are expected to range from $99 to $999 for VIPpackages that include a meet-and-greet with her highness herself, the “Big O.”

Oprah told the Hollywood Reporter that she has pined for a domestic tour for quite a while and has placed the idea on her bucket list.  The focus of the highly anticipated cross-country meetings will be to inspire folks to live their best life, ”It’s about living the life you want, because a great percentage of the population is living a life that their mother wanted, that their husband wanted, that they thought or heard they wanted,” says Winfrey, adding that she will use the platform to push themes of “empowerment, resilience, and authenticity.”

Tickets for the tour are expected to go on sale starting on April 7th and more information about it can be found on the Oprah.com website.

Dr. Sheila Brooks, the founder, president and CEO of SRB Communications, a full-service Washington, D.C.-based advertising and marketing agency, has earned an Image Award nomination in Outstanding Literary Work as one of the authors, (along with Clint C. Wilson) of the new book, “Lucile H. Bluford and the Kansas City Call: Activist Voice for Social Justice.” […]