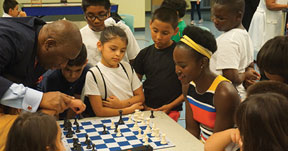 Orrin Hudson, founder of Be Someone, partners with Lupita Nyong’o to promote new Disney Film, “Queen of Katwe”

NATIONWIDE — Chess champion Orrin “Checkmate” Hudson from Stone Mountain, GA, has been chosen by Disney Studios to help promote their new film Queen of Katwe starring Oscar award-winning actress Lupita Nyong’o (12 Years a Slave) and actor David Oyelowo (Selma, The Butler). The film tells the story of the life of Phiona Mutesi, a 10-year old girl from the slums of Katwe, Uganda, who learns how to play chess and goes on to become a global chess champion.

Hudson, who is also the founder of an organization called Be Someone was asked to bring his personal and professional messages to the “Queen of Katwe” audiences. Just like Phiona in the film, Hudson learned the game of chess as a youngster and it propelled him to unimagined heights. Now, as a world-class champion, he explains that he was once an at-risk high schooler when a teacher taught him through the game that he could be someone if he used his God-given smarts and talents positively. That changed his life.

Orrin’s tour to promote the film included a series of KATWE Boys and Girls Club workshops, and it took him to four different cities (Atlanta, Washington DC, Chicago, and Los Angeles) from September 12-16.

During his visit to Los Angeles, actress Lupita Nyong’o who stars in the film, joined Orrin for a special workshop with several young local children.

Regarding the game of chess, Hudson comments, “I learned that for every move I make, whether it be on the chess board or in life, there is a con-sequence.” He now teaches this through his Be Someone Inc. organization that has literally touched and changed the lives of more than 50,000 young people coast-to-coast.