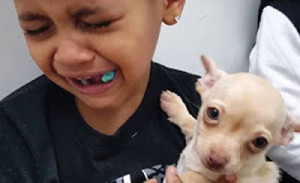 Why and how people are getting puppy poop infections

Puppies are oh so cute, but recently these cute little canines are sending people in 12 states to the hospital. Why? Puppy poop is contaminating people with the potentially deadly Campylobacter bacteria infection that has affected 55 people across 12 states.

According to the U.S. Centers for Disease Control and Prevention, cases of Campylobacter bacteria infection rose from 39 in mid-September to 55 reported this week. Infections have now been reported between September 2016 and October 2017 in Florida, Kansas, Md., Missouri, New Hampshire, New York, Ohio, Pennsylvania, Tennessee, Utah, Wisconsin and Wyoming.

Where is the bacteria coming from?

The infection comes from contact with puppy poop, causing symptoms such as diarrhea (sometimes bloody), cramping, abdominal pain and fever within two to five days after exposure. It can last a week without treatment, but it can be deadly for some people who have weak immune systems.

How to prevent puppy poop infection