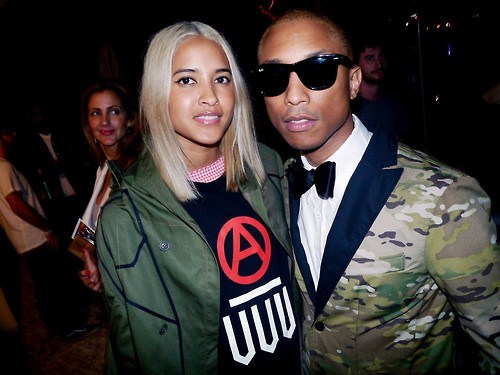 Music dynamo Pharrell Williams (pictured) finally married Helen Lasichanh (pictured), his longtime girlfriend and the mother of his four-year-old son, Rocket, on Saturday at a chic affair aboard a yacht in Miami, Fla., according to US Weekly.

The legendary triple threat, recording artist, producer and song writer got hitched in untraditional attire. Both he and Helen wore head-to-toe plaid which is not such an off-the-beaten path selection for the performer, given his rep for being avant-garde with his fashion choices.

There were guests who were dressed in tartans as well.

Crooner Usher and rapper Busta Rhymes were reportedly on hand to entertain the couple’s guests as they performed a mini concert. There is also speculation that singers Justin Timberlake and Robin Thicke also strutted their stuff for the happy couple as well.

Pharrell and Helen have remained mum over the years about their relationship, reportedly choosing to not part their lips to the media about any aspects of their union.

The 40-year-old performer recently came under fire for his contribution to “Blurred Lines” by listeners who say that the song rips off Marvin Gaye’s 1977 “Got to Give It Up.” Pharrell was also harshly criticized for defending the recent controversial twerking performance of Miley Cyrus at the Video Music Awards this summer.

That said, we wish you well, Pharrell and Helen!