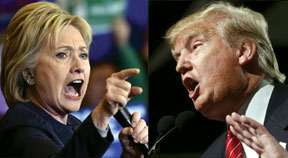 Hillary Clinton now boasts a double-digit edge over Donald Trump in their battle for the presidency, according to a new poll.

That’s the biggest spread since the tracking poll began asking about the general election matchup in May. But Clinton’s advantage over Trump shrinks to 6 points when third-party candidates enter the picture.

http://grosirrumahan.com/konveksi-rok-levis-panjang-anak-tanggung-murah-26ribu.html NBC News/Survey Monkey conducted its latest sampling of 11,480 adults who say they are registered to vote via online interviews Aug. 1-7. It has a 1.2 percent margin of error.

Clinton’s lead jumped from one point to eight after becoming her party’s presidential nominee at the Democratic National Convention.