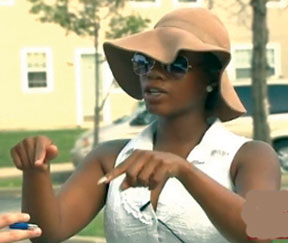 A pregnant woman who protested the killing of Michael Brown says police pulled a gun on her, then maced and threw her to the ground.

Mikiesha Wickerson of Ferguson, Mo. said the officers dressed in riot gear were unapologetic as they threw her to the ground. Cell phone video shows officers running to her vehicle and pulling the passengers out.

She said although no one in the car had weapons, those inside did yell at the police before they rushed the car.

“I was like ‘can I please get some air’ because I started contracting and I was sweating and had the mace running through my eyes,” Wickerson said. She says officers also broke out her back window and she can’t understand why her property was destroyed and she and the others were taken to jail for just talking.

Wickerson went to the hospital where she was told that both she and her unborn child were fine.

Riots broke out in Ferguson after an unarmed teen was gunned down by police.

“He (the officer) shot again and once my friend felt that shot, he turned around and put his hands in the air,” said Dorian Johnson, a friend of Brown’s. “He started to get down and the officer still approached with his weapon drawn and fired several more shots.”

A CNN report also claims that officers called protesters “animals”, saying “Bring it, all you f*cking animals! Bring it!”

The FBI has launched its own investigation into the shooting, and “will continue to monitor the investigation that is being carried out by the St. Louis County Police Department,” reports the Washington Post.