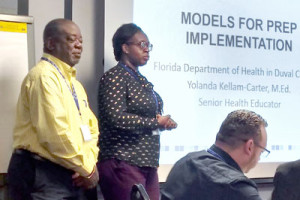 Black pharmacists from Duval County were among the participants at the Florida PrEP Institute.

On Jan. 10, 2018, the Florida Department of health took action to encourage more medical professionals in the state to prescribed pre-exposure pro-phylaxis (PrEP) when it invited experts from San Franciso’s Department of Public Health (SFDPH) to conduct the Florida PrEP Institute — training about PrEP Ifor state and local health professionals as well as community-based organizations.

While many states have seen HIV infection rates decline, Florida’s HIV rates remain strikingly high. According to AIDSVu, Florida has the third-highest HIV prevalence in the nation, behind only New York and Maryland. In 2014, 609 out of every 100,000 people in the state were living with HIV. The state’s rate of new HIV diagnoses is tied for second nationally with Georgia and trails only Louisiana.

Within Florida itself, the 2015 HIV Surveillance Report (pdf) from the Centers for Disease Control and Prevention shows that South Florida has the highest rate of new cases, at 38.8 per 100,000, more than three times the national average. In 2014, Blacks accounted for 57 percent of AIDS deaths (pdf) in the state.

But as disturbing as these HIV rates are, they are even higher among Black Floridians. According to the Florida Department of Health, in 2013, at 95.5 per 100,000, the HIV prevalence among Blacks (pdf) in the state ranked fourth nationally, trailing only Washington, D.C., Maryland and New Jersey. The rate of Black males living with an HIV diagnosis is 4.5 times that of White males, and the rate among Black females is almost 18 times that of White females. So getting healthcare providers on board with PrEP is particularly important for Florida’s Black residents.

“Knowing that Florida leads the country in terms of HIV cases among Blacks, the Black AIDS Institute wanted to be a part of this training process to ensure that the services offered were inclusive culturally of Black communities,” says national HIV/AIDS consultant Leisha McKinley-Beach, the Institute’s manager of health departments.

(In other efforts to increase PrEP uptake within the state, Miami-Dade County has been working to ensure that physicians are fully informed about PrEP. Gainesville and Orlando are also getting the word about PrEP out to Black communities. And last month, Florida health officials announced that the state will start providing PrEP free of charge by the end of 2018.)

The objectives of the Florida PrEP Institute were, first, to train health professionals about the benefits of PrEP and, second, to help participants develop a plan of action for when they return to their prospective communities.

“The goal was to bring county health departments together with community-based clinics to develop organizational implementation plans to figure out what it was going to take to offer PrEP in their clinics over the next six months,” says Jonathan Fuchs, M.D., MPH, director of the Center for Learning and Innovation within SFDPH’s Population Health Division, and an associate clinical professor of medicine at the University of California, San Francisco. “Our SFDPH team has extensive experience in developing these types of summits and institutes, and we applied what we learned to help Florida address their burgeoning HIV epidemic through PrEP scale-up.”

CBOs were given a say in the PrEP Institute—and it was eye-opening. “I think people were most impressed with the way we launched the institute with a PrEP consumer panel,” says Dr. Fuchs of the inclusion of the AIDS movement’s foot soldiers in local CBOs. “Hearing directly from patients/clients about what worked and what was challenging during their PrEP experience was critical to the success of the sessions that followed.”

Participants left the Florida PrEP Institute with draft PrEP implementation plans that they can continue to develop in conjunction with local stakeholders and decision-makers within their home institutions. The Florida Health Department plans to have a second PrEP institute, according to McKinley-Beach.

Candace Y.A. Montague is an award-winning freelance journalist in Washington, D.C. Her work has been featured in several online and print publications, including The Washington Post and The Grio.

In the 1950s, Topeka, Kansas, where Linda Brown lived, like a lot of America had dual de facto school systems. One for Black children and one for white children. Black children might be living only a few blocks away from a school but could not attend that school if it was a “white” school.  Instead Black children would be shuttled miles away from their neighborhood school to a “Black” school. […]

We’ve had enough of poor leadership

We’ve had enough of poor leadership
[…]