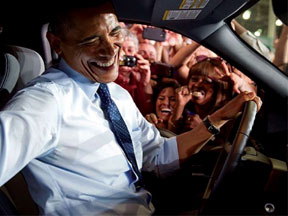 As his presidency comes to a close, President Barack Obama is going out with a bang. Within his two terms he’s made some major changes in the country and his latest is one of cultural homage. On May 31, President Obama declared the month of June 2016 “African-American Music Appreciation Month” in a presidential proclamation.

Although June was first deemed “Black Music Month” by Jimmy Carter and campaigned for by songwriter and producer Kenneth Gamble back in 1979, President Obama felt strongly that an official proclamation was more appropriate, especially as our first Black President.

The full text of the proclamation calls African-American music “among the most innovative and powerful art the world has ever known.” President Obama also calls upon “public officials, educators, and people of the United States to observe this month with appropriate activities and programs that raise awareness and foster appreciation of music that is composed, arranged, or performed by African Americans.”

Throughout his time in office, President Obama has shared his love for lyricists like Kendrick Lamar and Mos Def and have praised singers like Mary J. Blige and Erykah Badu. He has even met with a slew of musicians ranging from J. Cole to Chance the Rapper to Nicki Minaj to Pusha T to discuss the “My Brother’s Keeper” initiative — a way to address persistent opportunity gaps faced by boys and young men of color and ensures that all young people can reach their full potential.

“This month, we celebrate the music that reminds us that our growth as a nation and as people is reflected in our capacity to create great works of art,” he continued. “Let us recognize the performers behind this incredible music, which has compelled us to stand up — to dance, to express our faith through song, to march against injustice, and to defend our country’s enduring promise of freedom and opportunity for all.”