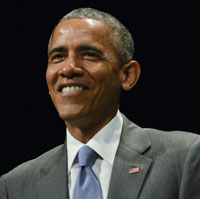 In May of 2017, the Black unemployment rate hit its lowest level in 17 years: 7.5 percent. Then, in June, the jobless rate for Blacks fell to 7.1 percent, before rising to 7.4 percent in July, according to the latest jobs report.

The jobs numbers over the last six months have generally been impressive. It’s fascinating to note that, suddenly, all the accusations that low jobs numbers were “fake” when President Barack Obama was in office have suddenly vanished.

The 30 year-high for Black joblessness in late 2011 prompted members of the Congressional Black Caucus (CBC) to embark on an August 2011 jobs tour. That same year, President Obama barked at members of the CBC at their annual gala to “put on your marching shoes…and stop whining and complaining.”

Several political observers pointed out that many jobs being added to the U.S. economy are in the service sector, such as restaurants and healthcare.

“Ensuring workers have better jobs and better wages also means they should be trained with the tools they need to succeed in our economy,” said Rep. Bobby Scott (D-Va.) the top Democrat on the Education & Workforce Committee in the House, in a statement on August 4.

Though the reasons for rising and falling Black unemployment over the last six months are not clear, it is clear that the current numbers reflect Obama’s economic policies; President Donald Trump has yet to implement any economic strategy and his proposed budget won’t take effect until next year, at the earliest. Additionally, Congress has passed nothing related to the economy regarding taxes or jobs.

Barack Obama epitomized the Black leader illusion. “At the end of his presidency, Black people were in the same state they were before he was elevated to the highest office in the land,” observed Dr. Claud Anderson in his book, A Black History Reader. Moreover, “Most visible Blacks do not equate to Black leaders. They are double agents who intentionally represent everyone” as an excuse to ignore the Black masses. […]