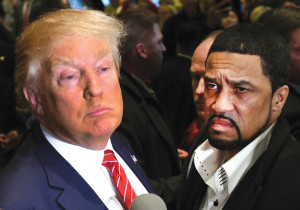 There was the proposed massive budget cut to the Department of Housing and Urban Development; the incessant rhetoric about a rise in crime in the nation that lacked evidence to back it up; the threats of a renewed war on drugs. There was even a failed attempt to bully Republican lawmakers into passing a flawed bill that sought to roll back the Affordable Care Act, a law that provides healthcare to millions of Americans.

This was President Donald Trump’s first 100 days in the White House. Trump didn’t win a single legislative achievement during his first 100 days. For policies that impact the lives of African Americans, it was just as perilous as you thought it would be. During the 2016 campaign, Trump often described the Black community as a monolithic, stereotypical caricature. Trump used the types of violent stereotypes one parrots after they’ve binge-watched 11 seasons of “Law & Order,” but have never actually been to an inner city.

So, much of what Donald Trump focuses on is about undoing the accomplishments of the first Black President of the United States. The obsession with “alternative facts” and the erasure of President Obama’s legacy continues to be the core focus within the Trump Ad-ministration.

Days before his 100th day in office, Trump’s spokesman Sean Spicer blamed President Obama for the fiasco surrounding Gen. Michael Flynn. Flynn, a loud supporter of Trump during the 2016 campaign, was fired by Trump as National Security Advisor on February 13 and ended up holding the position for the shortest time in U.S. history (24 days) after it was reported Flynn lied to Vice President Pence.

Trump’s Attorney General Jeff Sessions, perhaps the most dangerous federal official for African Americans, sought to revive the “War on Drugs,” a set of policies that disproportionately impacted African Americans in the 1980s and 1990s.

“We can wish that we could just turn away and reduce law enforcement,” said Sessions in 2016. “But I do believe that we’re going to have to enhance prosecutions. There just is no other solution.”

During a trip to Richmond, Va., on April 11 Sessions said: “We need to say, as Nancy Reagan said, ‘Just say no.’ Don’t do it…We can reduce the use of drugs, save lives and turn back the surge in crime that inevitably follows in the wake of increased drug use.”

None of this should be a surprise to the Black community. Sessions comes from Alabama where incarceration is high art. Placing humans in cages is Alabama’s leading industry. At 70, Sessions is a stark reminder of another era. He’s also a re-minder of how old, failed policy is difficult for so many to break away from. With so many Re-publicans embracing “smart on crime” policies, Sessions is deter-mined to star in the movie “Groundhog Day” on federal crime policy.

The inmate population in the U.S. rose from 500,000 in 1980 to 2.2 million in 2015 and has made the U.S. No. 1 in the rate of incarceration in the world. When there’s an uptick in law enforcement, do more police show up in Manhattan or the Georgetown section of Washington, D.C.? Of course not. A quick glance at the stop-and-frisk statistics the ACLU tabulated in New York City over a ten-year period, in an effort to identify the communities that experienced the greatest number of interactions with police after an elected official (in that case former New York City Mayor Rudy Giuliani) decided to “get tough on crime,” tells the story.

Pastor Darrell Scott of Cleveland, a Trump supporter, held a summit on gang violence in Washington D.C. on April 18. The focus was on crime in Chicago and Trump Administration officials attended. Did they introduce or invite any policy proposals to address any of the underlying issues that plague some of the predominately Black neighborhoods in the Windy City (i.e., high unemployment, high poverty, poor schools)? Not quite yet.

During Trump’s first 100 days he met with seven members of the Congressional Black Caucus.  He also met with over a hundred presidents of Historically Black Colleges and Universities in the Oval Office to take what would turn out to be a historic set of images.  In the end the truth is obvious: It will take more than pictures and meetings for there to be verifiable evidence that President Trump actually wants to have a positive impact on the African American community.  So far, there has been a ton of talk that has not been reflected in hard policy. As Trump revealed during a recent interview, the job of President of the United States was tougher than he imagined, it’s clear that some policy, particularly policies impacting African Americans, rest in the hands of his appointed minions many of whom have shown no interest in issues affecting the Black community.

That defining moment has for a long time been the motivation for Heritage City – The African Kingdoms and Empires Theme Park Project pioneered by a group of Africans and African Americans under the umbrella of the Heritage City Group, which funded a business plan and conceptual designs for the project in 2004. […]

“The one being carried does not realize how far away the town is.”

“The one being carried does not realize how far away the town is.”

A call to Bernie Sanders and Cornel West on reparations: […]