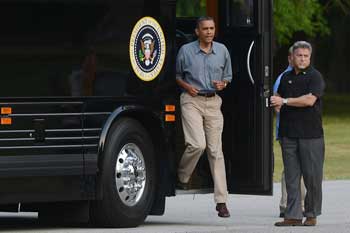 With four months left before the presidential election, some political experts have suggested that the Obama team and campaign is struggling to find the best way to present the President’s vision. But the President is still giving his message to cheering crowds on this tour as they embraced the opportunity to see President Obama.

“When ordinary Americans decide what’s right they can’t be stopped,” Obama said as the cheering crowd drowned him out. In Maumee, Ohio, President Obama received sustained applause, and cheers as he promised his health-care law was “here to stay.”

Fundamentally, the President and Romney have different contrasting visions for America, and the most recent Quinnipiac University polls have President Obama holding a nine-percentage point lead over Romney in Ohio, and a six-point lead in Pennsylvania. President Obama won both states four years ago, but the Republicans are campaigning hard, and they raised more money than the Democrats in June.

The title of this tour is “Betting on America” and the President is praising his economic policies and acknowledging his success in rescuing the U.S. automakers. The tour took the president through northern Ohio and western Pennsylvania, and highlighted his commitment to investing in American workers and creating jobs here at home. In many of these cities the president appealed to voters in areas with many union workers, and in both states the unemployment picture is 7.3 percent, and better than the national rate.

The Bureau of labor statistics reported that June’s unemployment rate remained flat at 8.2 percent, with 80,000 new jobs created. The report indicates that the trend is still positive, but many of the political experts expect more jobs to be created in the next few months.

Nevertheless, in Pennsylvania and Ohio the president talked about his work over the last three years to get our economy on track, and growing our economy from the middle out. President Obama is rebuilding an economy meant to last, and restores middle class security by investing in education, energy, innovation, rebuilding the infrastructure and reforming the tax code. The president wants all Americans to play by the same rules, from Wall Street to Main Street, and everyone pays their fair share.

The president’s vision stands in stark contrast to Mitt Romney’s vision, where he believes that the economy should be built from the top down. Romney’s economic plan creates tax cuts for the wealthy, guts investment in education, and encourages outsourcing. According to independent economist, Romney’s economic plan would fail and make our economy worse.

The Obama campaign has accused Romney of outsourcing job to China when he ran the private equity firm Bain Capital. “Mitt Romney’s companies were pioneers in outsourcing U.S. jobs to low-wage countries. He supports companies that ship jobs overseas,” says an Obama ad airing in Ohio, Pennsylvania and other states.

President Obama and his administration have filed an unfair trade complaint against China with the World Trade Organization. This is the seventh such action taken against China, and the Obama administration believes that the situation can improve with continuous pressure on China.

President Obama is betting on America, and it would make sense to support a candidate where he wants everyone to play by the rules, and everyone gets a fair chance. It is time to invest in America, and move forward.

Obama is Time’s person of the year, but…

President Barack Obama is Time magazine’s Person of The Year for the second time, the magazine announced. He also earned the honor in 2008 after his first election to the presidency.
[…]

Recently the Supreme Court made a historic decision that will fundamentally transform healthcare for years to come. The decision means that President Barack Obama’s Affordable Care Act […]