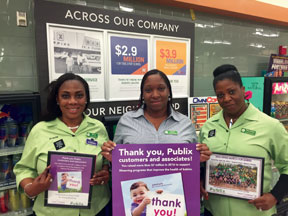 March of Dimes announced Publix Super Markets, based in Lakeland, Fla., is the new number one national 2016 March for Babies corporate partner. With 1,120 stores in six states, Publix associates and customers raised $7.3 million, bringing their 21-year partnership total to an impressive contribution of $65 million. Pictured are Publix associates from Store #1003 in North Miami. Names from l to r: Marie, Yasha and Maulette.

FORT LAUDERDALE, FL – For the first time in 30 years, there is a new number one national March for Babies corporate partner, the March of Dimes announced during its annual March of Dimes Summer Conference. Dr. Jennifer Howse, president of the March of Dimes, told the hundreds of attendees that Publix Super Markets, Inc. has earned that distinction.

“We congratulate Publix, their associates, and customers for this outstanding accomplishment,” says Dr. Howse. “Publix’s commitment to our goal of giving every baby a fighting chance has been unwavering for 21 years. The impact of this generous contribution to help fight premature birth, the leading cause of death among babies in the United States, is significant and substantial.”

Publix, based in Lakeland, Fla., with 1,120 retail stores in six states: Alabama (61), Georgia (182), Florida (768), South Carolina (56), Tennessee (39) and North Carolina (14), has worked alongside the March of Dimes for more than two decades. This year, during their annual three week in-store and associate March for Babies fundraising campaign, Publix customers and associates raised more than $7.3 million, an 18 percent year-over-year increase for the second straight year. This brings the Publix 21-year total to an impressive contribution of more than $65 million to help more moms have full-term pregnancies and healthy babies.

“I’d like to give a big thank you to the more than 180,000 associates across our company who give of themselves every day in our stores and communities. Our people truly make the difference, and without them, we wouldn’t have been able to achieve our stellar campaign results,” says Todd Jones, Publix CEO & president. “And with the passion of our associates, comes the generosity of our customers. We’ve always said, we have the best customers in the industry. And each year, they rise to the occasion to

March for Babies is Publix’s largest-grossing customer facing campaign. The company also raises awareness within the communities it serves through outreach by associates who engage the hearts and minds of customers, Jones says.

Since Publix joined the March of Dimes in 1995, there have been many breakthroughs for mothers and babies, including:

* After years of March of Dimes advocacy, in 2008, all 50 states began to require screening of all newborns for 21 or more serious but treatable conditions immediately after birth.

*  The March of Dimes has opened five Prematurity Research Centers, a network of centers pioneering a “team science” approach that brings together scientists from a wide array of fields to find the unknown causes of preterm birth.

*  In April 2016, the Food & Drug Administration approved voluntary fortification of corn masa flour with folic acid after years of petitioning by the March of Dimes. Hispanic wo-men are about 20 percent more likely to have babies with serious birth defects of the brain and spine known as neural tube birth defects.

For the second year in a row, Publix Super Markets is the number one national March for Babies corporate partner, raising more than $8.3 million dollars to help give every baby a fighting chance. […]