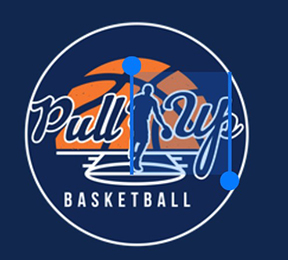 “ The two best days of your life:  The day you are born and the day you discover why.” Jonathan “JDOGG” Lederman

A chance meeting at a Starbucks in which a conversation was overheard  about the defunct pro basketball team, the ABA’s South Florida Gold, led to a partnership between two strangers – Coach Issac Colvin, who was there with his son Chris discussing the merits of team, and Jonathan “ JDOGG” Lederman, a frequent Starbucks visitor who often met clients there as a business consultant/promoter.    As someone who had done PA work with team, the purposeful intrusion was naturally based out of curiosity. That conversation led to Coach Colvin’s involvement in Pull Up Basketball, something Jonathan found intriguing. Thus began the partnership, though interrupted by Covid, which established the foundation for a girl’s travel basketball team AKA Pull Up Basketball.

Coach Colvin brings a wealth of experience – over 40 years coaching boys’ travel teams and other championship teams – as recruiting guru and teacher of the game. Born in Rock Island, Illinois, a Chicago suburb, he played collegiately at Truman College and professionally in the CBA, a G League forerunner. A promising basketball career became secondary as fatherhood ( a daughter and two sons) became his priority. He has tutored the Los Angeles Lakers standout Patrick Beverly and as a young prodigy in Chicago, Hall of Famer Tim Hardaway formed a bond with Coach Colvin, benefiting greatly from his tutelage.

At Pull Up- Basketball participants will have a unique experience as they will have the opportunity to learn the necessary skills to take their game to the next level while also gaining practical life skills and participating in community service projects. Participants will not only enhance their basketball IQ, but they will also learn how to navigate their way towards advancement. Participants will interact with players that have excelled at all levels while also learning from coaches who are dedicated to improving player skills both on and off the court.

Jonathan “JDOGG” brings a completely different dynamic to the partnership. A New York State native who spent his formative years in Broward County before eventually graduating from Hofstra University, he has always found satisfaction in helping others, and service and community involvement have always guided his professional decisions. He raised funds for Muscular Dystrophy as a young man and served a Peace Corps volunteer in the Philippines. His expertise with Pull Up Basketball lies in marketing, promotions, and public relations.

So what distinguishes Pull Up Basketball from other girls’ basketball travel squads.  First, they recognize that female athletes too often receive  inferior, second class treatment when compared to men at all competitive levels and is frankly underserved. Pull Up is determined to be a diverse, inclusive travel squad guided by equality and fairness. Coach Colvin and Jonathan “JDOGG” are intentional about taking a holistic approach to ensure the individual growth and development of  each player by giving equal attention to the basketball and education components. Educational elements include tutoring in Oral and Written  Communications, Financial Literacy, Public Speaking, Community Service ( there is presently a fundraiser in honor of Coach Colvin’s sister who lost her battle to breast cancer for the American Cancer Society sponsored by Pull Up Basketball involving the raffling of a basketball signed by HOF Tim Hardaway), Realistic Athletic Assessment, Employment Options other than actually playing; and knowledge of NCAA rule changes like the Clearing House and NIL, i. e., Name, Image and Likeness.

You can learn more about PUB on Instagram, Twitter and Facebook as well as their website. Their immediate goals are to recruit at least 12 athletes in preparation for a March tournament in Fort Myers. Obviously, sponsors are needed, encouraged and required to make this worthwhile endeavor a success. Coach Issac Colvin can be reached @ (754) 304-7701 and Jonathan “JDOGG” Lederman at (954) 254-8227. Hopefully and prayerfully the two components – BASKETBALL and EDUCATION – will assist in answering the second part of the opening quote: WHY?

The Westside Gazette, publisher Bobby R. Henry and staff will be monitoring your progress and wish Pull Up Basketball great success.