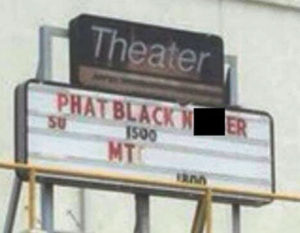 A report by the Atlanta Black Star said the racist picture was retrieved by a user on Military.com before it was shared on social media platforms.

In the racist photo, the theater’s marquee is altered to read “Phat Black N**r.” Reports reveal that the sign originally advertised the screening of the Black Panther movie scheduled for 3 p.m. on Sunday.

“Derogatory text was found on a marquee at Camp Hansen,” tweeted the Marine Corps Installations Pacific. “It was immediately removed and the incident is under investigation. Please visit our Facebook page for more information.”

On Facebook, the group wrote, “Marine Corps Installations Pacific is aware of an incident on Camp Hansen yesterday involving the posting of a racial slur on an AAFES marquee.”

They went further to denounce the act, saying the Marine Corps., doesn’t entertain such language.

“Please know that the language used is in direct contradiction to the core values of honor, courage, and commitment that we stand for as Marines,” the statement continued. “This type of behavior is not tolerated by the Marine Corps. The text has been removed and the incident is under investigation.”

Many users commented on the racist sign, with a notable number admitting that the Okinawa base is known for such racist occurrences.

“This crap again!” commented on. “We all bleed red! Take your ignorant, small minded beliefs and desert! We don’t need your petty crap in our Corps!”

Despite all the hate and jealousy, Black Panther just can’t be stopped. The movie has been winning right from day one. The blockbuster trounced the record for the highest February debut for a movie, beating the record initially set by Deadpool, also released by Marvel Cinematic Universe.

Forecasts say the movie could break the $1 billion mark even before it premieres in China.

Black Panther’s success has great historical significance. It goes down as the first and biggest opening movie for an African-American director and, because of its great success, Marvel is already thinking of doing more with Ryan Coogler.

Why is President Trump’s only Senior Black Staffer a Democrat?

Why is President Trump’s only Senior Black Staffer a Democrat?

What the Supreme Court nomination would mean for Black Women

“Black women are the largest constituency in the United States that has no representation on the Supreme Court – we’ve never had a Black woman Supreme Court Justice.” […]