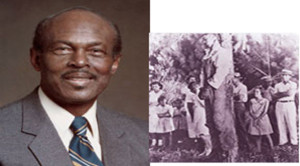 “Fort Lauderdale has lost a legend,” said Joseph “Joey” Owens about the recent death of his uncle, Alphonso “Al” Giles, 93.

Giles, a WWII veteran and retired Broward County teacher, passed away peacefully with loved ones at his bedside on Friday, Sept. 11, 2015 after a brief illness. His only child, a daughter, Yvette M. Giles, Ed.D., felt blessed to hold his hand as he made his transition.

“To be with my dear father during the final moments of his life was no less than a sacred honor,” said the younger Giles. “I hope and pray that he felt my presence. And I am grateful that he knew he was loved, admired, cherished and appreciated for his many achievements during this lifetime.”

While shaking Giles’ hand at a 2012 campaign rally in Hollywood, President Barack Obama personally thanked Giles for his WWII Army service to our country and surprised him by presenting Giles with a presidential service medallion.

Former students have also called, visited and sent notes to Giles through the years, thanking him for valuable learning experiences in his science classes.

“I studied microbiology because of you,” wrote Joseph H. Drisdom, who was in Giles’ class at Dillard in 1959.  Giles took great pride in knowing that Drisdom and such other students went on to achieve success in science professions as researchers, dentists, and physicians, etc., during a time when few Blacks entered these fields.

Giles, who pursued graduate and post-graduate studies at Howard, Temple, and North Carolina A&T, was a beloved science department head at Dillard High School, Everglades Middle School and Lauderdale Lakes Middle School. He also set a standard for punctuality and attendance: Giles was never late during his 33 years of teaching, and he was only absent one day, the day his daughter was born.

While teaching, Giles was among a small group of individuals from Fort Lauderdale who made history as the first Black students to attend Florida State College (FSC, now Florida State University) in 1962. Giles and his colleagues were selected by the Broward County School Board to study graduate-level math and science at FSC through a National Science Foundation grant. Fellow students included his fraternity brothers, Ellis Miller, Jr.; former Fort Lauderdale commissioner, Andrew DeGraffenreidt, the Reverend Dr. Allen E. Orr; and John T. Saunders. Other students included Robert Gaddy and Leonelda Fullins, as well as Cody Swan and Alfred Thurston, both from Pompano Beach.

Earlier this year, Giles was presented with a Lifetime Achievement Award by his dear fraternity, Alpha Phi Alpha. Giles was a founding member of Fort Lauderdale’s Zeta Alpha Lambda gradate chapter. Prospective Alphas honored him on Brother’s Keeper Day in April by performing strenuous outdoor tasks and enjoying lunch with Giles at his Fort Lauderdale home.

Giles had a passion for boating and was the first African American member of Broward County’s Marine Advisory Board. He was also long-time member of our community’s Jolly Anglers Boating Club and an early member of the Power Squadron. Giles completed navigation courses that enabled him to pilot his yacht, “Sea Hunter,” across the Gulf Stream to the Bahamas in 1970.

On his 93rd birthday in May of this year, family members treated Giles to a day onboard the three-deck yacht, “In-sanity.” He and 19 close relatives and friends cruised New River and the Intercostal waterway on a beautiful sunny day, anchoring for a lunchtime celebration near Las Olas Boulevard.

“When we were boys, Uncle Al took my brother, Charles, and me out on his boat on weekends during the ’50s and early ’60s,” said Johnny Taylor. “I couldn’t think of a better way to celebrate this special birthday than to get him back out on the water.”

Giles was moved to tears when he learned that his daughter, Yvette, whom he taught to pilot Sea Hunter as a child, piloted the yacht, Insanity, through the winding bends of New River for the last hour of the cruise.

“And just think,” said Giles with great emotion that evening, “my daughter piloted a triple-decker yacht!”

Giles was born on May 2, 1922, in Pine Mount (near Live Oak), Fla., to the late Willie and Anna Giles, who moved to Fort Lauderdale from Pine Mount when Giles was two years-old. He attended the Dillard School from elementary grades through high school. And, although a good student, he fondly recalled sometimes cutting classes to go swimming with other boys at “Dillard Ville,” their nickname for a branch of the North Fork of New River.

“Giles was smart – he could have been valedictorian of our class if he hadn’t been leading his friends to Dillard Ville to swim,” said longtime close friend and classmate, Catherine Pratt. Giles and Pratt graduated from Dillard with the Class of 1941. Only Pratt, Nancy Sidney Dawkins (Miami) and Eliza-beth Jackson (Quincey) remain.

Giles, a Big Band aficionado, spoke fondly of growing up in Fort Lauderdale near the historic Fifth Avenue District. While in high school, he would often sneak into the Windsor Club to see and hear music greats like Duke Ellington, Count Basie, and his favorite, Earl “Fatha” Hines in performance.

“Those musicians had great style, always wearing tailor-made suits and ties,” Giles said about the Big Band performers. “And they played real music.”

Giles also witnessed the dark past of Fort Lauderdale. As an adolescent, he sometimes visited an old saw mill on Seventh Avenue near Fourth Street to chat with Reuben Stacey, a local carpenter, and watch him at work. Stacey was famously lynched by Deputy Sherriff Bob Clark amid a spectacle of onlookers in 1935. Giles’ childhood friend, the son of funeral director Benton, took him into a back room of the funeral home to view Stacey’s body, which had been unceremoniously delivered by Clark.

“I saw Reuben Stacey lying on a stainless steel gurney,” said Giles. “And although he had been hanged, his body was riddled with bullet holes. The people who murdered him had also mutilated his body by cutting off his genitals.”

Giles, affectionately referred to as a “walking encyclopedia,” discusses his memorable experiences growing up in historic Fort Lauderdale in great detail, as well as his WWII Army service as a water purification specialist in the sweltering jungles of New Guinea, during an interview filmed at Grace Center Ministries in July of last year. The video titled, “Alphonso Giles: Story from an American Hero,” will be shown on Friday, Oct. 2, 2015 at Mt. Hermon AME Church in Fort Lauderdale, during Giles’ wake, from 5 to 8 p.m. A homegoing service will be held on Saturday, Oct. 3, at 1 p.m., Mt. Hermon, with the Rev. Henry Green, pastor, officiating.

Giles is survived by his loving wife of 66 years, Ruth, also a retired teacher, and one daughter, Yvette. He is also survived by a devoted brother Harry (Hattie) Giles, and a host of loving nephews, nieces, cousins and friends.