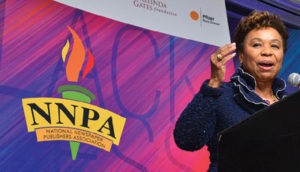 Rep. Barbara Lee (D-Calif.) said that she’s considering a campaign for Chairman of the Democratic Caucus in the House. In this photo, Rep. Lee gives remarks during the NNPA’s 2018 Torch Awards Dinner in Washington, D.C. (Freddie Allen/AMG/NNPA)

Rep. Barbara Lee (D-Calif.) said that she’s seriously considering running for Chairman of the Democratic Caucus, the fourth-highest ranking position in Democratic leadership in the United States House of Representatives.

“Given where our party is and the direction that it needs to go in…my history and experience demonstrate that I really can help unify the Democratic Party,” Lee said.

As an example, Lee noted her work leading up to the 2016 Democratic presidential primary. Lee said that she didn’t endorse former Secretary of State Hillary Clinton or Vermont Senator Bernie Sanders. And it wasn’t because of ideological differences; Lee said that she wanted to help craft the party’s agenda.

“I helped negotiate a very progressive, very inclusive Democratic Party platform and both sides—the Clinton delegates and the Sanders delegates—thanked me for that,” Lee said, adding that, bringing people together from diverse backgrounds to accomplish common goals is a role that she has played her entire life.

When it comes to her political career in the U.S. Congress, Lee was instrumental in authoring or co-authoring “every major piece of HIV/AIDS legislation including the legislative frameworks for the President’s Emergency Plan for AIDS Relief (PEPFAR) and the Global Fund to Fight AIDS, Tuberculosis and Malaria,” during President George W. Bush’s administration.

According to her official biography, in 2007, Congresswoman Lee worked with a diverse coalition of members to create the “Out of Poverty Caucus” and she has long advocated for legislative action to end poverty.

As the chair of the Democratic Whip Task Force on Poverty, Income, Inequality and Opportunity, Congresswoman Lee guides more than 100 members of Congress in crafting and advancing legislation to lift millions of American families out of poverty and into the middle class.

Lee said that the Democratic Party must focus on “all of the issues that people care about” including challenges facing low-income and working-class families, racial and economic justice, and criminal justice reform.

Congresswoman Lee currently serves on the Budget Committee and the Appropriations Committee, which oversees all federal government spending, according to her congressional website.

“She serves on three subcommittees (State and Foreign Operations; Labor, Health and Human Services, Education; and Military Construction and Veterans Affairs) of the Appropriations Committee and she currently serves as Co-Chair of the Pro-Choice Caucus,” Lee’s biography said.

As a priority, Lee said that she’s focused on wresting control of the House from the Republican Party during the 2018 midterm elections. The New York Times reported that, “Democrats, who have been sidelined as the House minority party since 2010, need to flip 24 Republican seats while keeping the 194 seats they currently hold.”

To regain control of the House, Democrats will rely heavily on increasing voter turnout, especially Black voter turnout, during the midterm elections.

According to an NPR article on voting trends in the U.S., “Many analysts say a natural drop-off was expected in the post-Barack Obama era. But the 2016 voter turnout for African-Americans was not just lower than the Obama years, it was even slightly lower than the 2004 election between George W. Bush and John Kerry.”

Despite the challenges associated with mobilizing voters in a post-Barack Obama era, political analysis shows that energizing Black voters remains critical to the Democratic success at the polls.

NPR reported that Black voters, particularly Black women, were key to Democratic victories in both the Virginia gubernatorial race and the Alabama senate race in 2017.

“Black women are the most loyal and the most consistent Democratic voters and we have never been at the leadership table in the history of Congress,” Lee said.

For many Black voters, that dynamic must change in order for the Democratic Party to remain viable and credible in the Black community.

Dr. Benjamin F. Chavis, Jr., the president and CEO of the National Newspaper Publishers Association, said that Congresswoman Lee’s campaign to provide national leadership within the Democratic Party is directly related to the NNPA’s national campaign to increase Black civic engagement by encouraging millions of African Americans to register to vote and to cast ballots during the midterm elections.

Dr. Chavis added that Rep. Barbara Lee is not only a long-time champion of political, social and economic empowerment in the African American community across the nation, but “she has also been a stellar global leader in the Caribbean, Africa and throughout the African Diaspora, where people of color continue to strive for freedom justice and equality.”

Dr. Chavis continued: “If Congresswoman Shirley Chisholm were alive today, she would be so proud that Congresswoman Barbara Lee is upholding her legacy and the legacy of Rep. Barbara Jordan of Texas.”

‘Christ goes by many names’

‘Christ goes by many names’