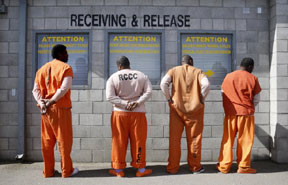 Report: Incarceration shows little to no effect on crime

WASHINGTON, D.C. (NNPA) – In the last two decades mass incarceration, a system that has a disproportionate negative impact on the Black community has had little to no effect on crime, according to a new report.

Researchers at the Brennan Center for Justice at the New York University School of Law, a nonpartisan think tank that advocates for criminal justice reform, looked at 14 of the most common theories associated with the decline of crime, including incarceration, an aging population, decreased alcohol use, consumer confidence and even decreased lead in gasoline and found that the current levels of incarceration were ineffective in reducing crime.

Inimai Chettiar, the director of the Justice Program at the Brennan Center, wrote that mass incarceration has been a vast, costly social experiment that has spanned four decades.

Chettiar said, “At current rates, one in three black males can expect to spend time behind bars. This archipelago of prisons and jails costs more than $80 billion annually – about equivalent to the budget of the federal Department of Education.”

The report said that from 1990-1999 an aging population, decreased alcohol consumption, decreased unemployment, growth in income, increased rates of incarceration and the number of police likely had an effect on crime.

“Since 2000, the effect on the crime rate of increasing incarceration, in other words, adding individuals to the prison population, has been essentially zero,” stated the report. “Increased incarceration accounted for approximately 6 percent of the reduction in property crime in the 1990s (this could vary statistically from 0 to 12 percent), and accounted for less than 1 percent of the decline in property crime this century.”

According to the report, CompStat-style programs accounted for about 5 to 15 percent decrease in crime in city urban police departments where they were employed. The report also noted that CompStat policies were different than policing tactics like broken windows, hot spots, or stop-and-frisk.

Researchers said that CompStat contributed to the sharp decline New York City’s from 1994 to 2012, a 63 percent fall vs. 27.2 percent nationwide.

Even though state lawmakers in Florida passed legislation to abolish mandatory minimums for some low-level drug offenders, the report said that “without major reforms, the state continues to suffer from high rates of recidivism, probation violations, and juveniles graduating to the adult system.”

Past felony convictions often make it difficult or impossible in some cases for ex-offenders to access federal housing, food and education aid and employers use criminal records to screen potential candidates. Limited opportunities on the outside often increase their chances of returning to prison. One in 9 Black children have a parent who is incarcerated increasing the likelihood that they will grow up poor with limited access to high quality education and opportunities continuing the cycle of poverty.

In the foreword to the Brennan Center report, Joseph Stiglitz, the former chairman of the United States Council of Economic Advisers and a 2001 recipient of Nobel Memorial Prize in Economic Sciences wrote that the United States needed to work on decreasing the effects of socioeconomic inequality instead of investing in policies that destroy human potential today and handicap the country in the future.

Stiglitz stated: “When high levels of incarceration provide scant public safety benefit, it is pointless to continue using – wasting – resources in this way. Instead, the country should shift priorities away from policies proven to be ineffective and focus our energies on truly beneficial initiatives that both reduce crime and reduce mass incarceration.”

“Every child should be able to have fun in a public pool without having to worry about facing prejudice.” […]