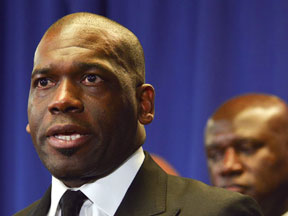 On May 12, the Rev. Jamal H. Bryant of Baltimore’s Empowerment Temple Church took to social media to address rumors and allegations that he had fathered another child and was refusing to pay child support for it.

In a video, Bryant said, “Over the last week a lot has been said, a lot has been suggested and like you I was thrown into a tailspin. I had to shut down for a minute so that my response would not be that of a man but be priestly as a man of God. To that end, let me say to you, I am one of those rare people who are flawed with character. With all of my issues, I don’t run from them but I stand right next to them.”

On May 5 Obnoxious Television posted the story of a woman named LaToya Odom who claimed that she had given birth to a son in July of 2015 and that the father was Bryant. Odom provided documents to the site that appeared to be a paternity test performed in Aug. of the same year by LB Genetics in Santa Ana, CA. The documents seemed to indicate that for Jamal H. Bryant “the probability of paternity is 99.9999%.”

Bryant neither confirmed nor denied the allegations that the 10-month-old child is his biological son in the video that’s about five minutes long. In-stead, he said, “The issues pertaining to and surrounding the allegations are in the middle of a legal discourse that precludes me from going into any depth to talk about it. But let me say to you, while many things have been said about me, running is not one of them.” He added, “My legal counsel said I cannot go into any depth talking about it, but there is nothing that can stop me from talking to God. When there is something to be said, you will hear it directly from me and you will not have to look for a secondary source.”

This is not Bryant’s first brush with public backlash. In 2007, he reportedly admitted to fathering an illegitimate child from the pulpit while he was married amidst pressure for him to step down as pastor.

Bryant and his then wife have since divorced. Bryant closed by saying, “God ain’t finished with me but when he gets through working with me, I shall come forth standing right beside you.” Before he ended his video stream Bryant also tried to pre-empt further questions about the child. He said, “I wanted to come on tonight so that there would be absolute clarity; Sunday morning is to discuss Jesus it is not to talk about Jamal. So when you come to church get ready to talk about how great God is and not the frailty of what Jamal possesses.”